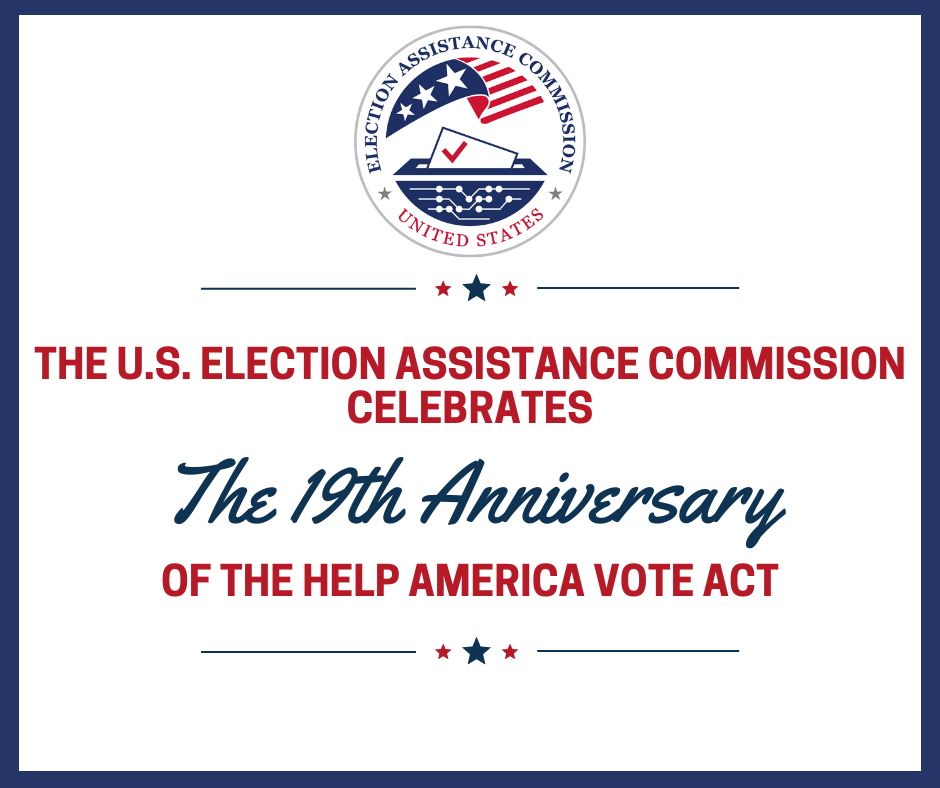 Since its passage on this date nearly two decades ago, the 2002 Help America Vote Act (HAVA) has served as a pillar of support for our nation’s electoral system – directing a bipartisan approach at the federal level to improving the accessibility and integrity of the electoral process, development of new minimum standards for voting systems, and supporting election officials who sustain the durability of our democratic process.

This landmark bipartisan legislation also established the Election Assistance Commission (EAC)—an agency that has assisted election officials throughout the country while modernizing voting systems and distributing federally appropriated resources and grants to the states to improve federal elections. As we mark the 19th anniversary of HAVA, it is important to recognize not only the progress made in the election community since its original passage but the many accomplishments of the EAC “as a national clearinghouse and resource for the compilation of information and review of procedures with respect to the administration of Federal elections.”

During the last year alone, the EAC has improved agency operations, completed key projects, and collected crucial research in preparation for the 2022 election cycle and beyond. To honor HAVA’s 19th anniversary, here are some of the EAC’s notable contributions to keeping our elections safe, secure, accurate, and accessible this past year.

In 2002, HAVA charged the EAC with developing voluntary voting system guidelines to keep electoral systems secure, detect and prevent fraud, protect voter privacy, reduce human error, and assess alternate means of creating voter access. This year, the EAC adopted and released the Voluntary Voting System Guidelines 2.0 (VVSG 2.0). The EAC is working on the next steps to implement these guidelines and develop the next generation of voting technology. The significant updates included in the VVSG 2.0 are:

While the EAC certification program verifies voting systems align with the VVSG, there is currently no similar federal testing system or standards for certification of election supporting technology, such as electronic poll books. The need for such a program grows as more jurisdictions across the country use this technology. This year the EAC has been developing a pilot program that would fill this gap and further improve election security.

HAVA charged the EAC with conducting studies of election administration issues. In August, the EAC published the biennial Election Administration and Voting Survey (EAVS), a state-by-state analysis of relevant data and statistics related to the administration of federal elections. As the national clearinghouse for information on election administration, topics covered in the 2020 EAVS report include voter registration and list maintenance, voting practices for overseas citizens and members of the armed forces, and other issues related to voting and election administration. The EAVS survey collects data directly from election officials in all 50 states, the District of Columbia, American Samoa, Guam, Puerto Rico, the Northern Mariana Islands, and the U.S. Virgin Islands.

HAVA also tasked the EAC with ensuring states and localities had the means to administer secure elections, ensuring proper data management protocols throughout the voting process. Chain of Custody refers to the processes, or paper trail, that documents the transfer of materials from one person (or place) to the next The EAC’s new Chain of Custody Best Practices report outlines considerations for conducting transparent, trustworthy elections. As stated in the guidance, “Every election office should have written chain of custody procedures available for public inspection prior to every election.” The National Association of Secretaries of State (NASS) Task Force on Vote Verification utilized this resource in their report on post-election audit recommendations.

This report is just one of the new election management resources developed by EAC staff in 2021, with more materials planned to be released soon.

HAVA was passed to make improvements to the voting process, including access for voters with disabilities. Throughout 2021, the EAC has taken significant steps to expand research and resources on this important topic. The EAC published, “Disability and Voting Accessibility in the 2020 Elections: Final Report on Survey Results,” examining progress made in voting accessibility since 2012. The results of this study show that progress has been made but obstacles remain for voters with disabilities. The EAC is working to assist election officials to close these gaps. In correlation with the 2021 National Disability Voter Registration Week, the EAC released a Best Practices: Accessible Voter Registration. This resource for election officials addressed the unique hurdles that voters with disabilities often face during the first step of the voting process and highlighted actionable steps that officials can take to remove these barriers.

The agency has recently added numerous subject matter experts to expand the support offered to election officials. These hires included staff fully dedicated to accessibility issues and another focused on language access. These experts will lead internal working groups and programming to ensure EAC best practices and resources help election officials to address the unique challenges of voters with disabilities and the language minority communities within their jurisdictions.

In 2021, the EAC allocated funds for the hiring of diversity, equity, inclusion, and accessibility (DEIA) staff and ensured the agency was in compliance with Executive Order 14035 on DEIA in the Federal Workforce and Executive Order 13985 on Advancing Racial Equity and Support for Underserved Communities Through the Federal Government. Since its inception, the EAC has worked to overcome the challenges in accessibility of voting and polling places, including the physical access for individuals with disabilities, providing nonvisual access for individuals with visual impairments, and providing assistance to Native Americans, Alaska Native citizens, and to individuals with limited proficiency in the English language.

The 2020 election cycle raised further awareness to the importance of safe, secure, accurate, and accessible elections, and highlighted the important role the EAC plays in supporting state and local election officials. Even in the midst of the historic and deadly COVID-19 pandemic, our agency and our elections remain steadfast. The EAC looks forward to celebrating the milestone 20th anniversary of HAVA in 2022. The agency will mark the occasion with a series of events highlighting the impact of HAVA since its passage and looking forward to what the next 20 years of election administration may bring. We hope that you will join us in marking this historic year.