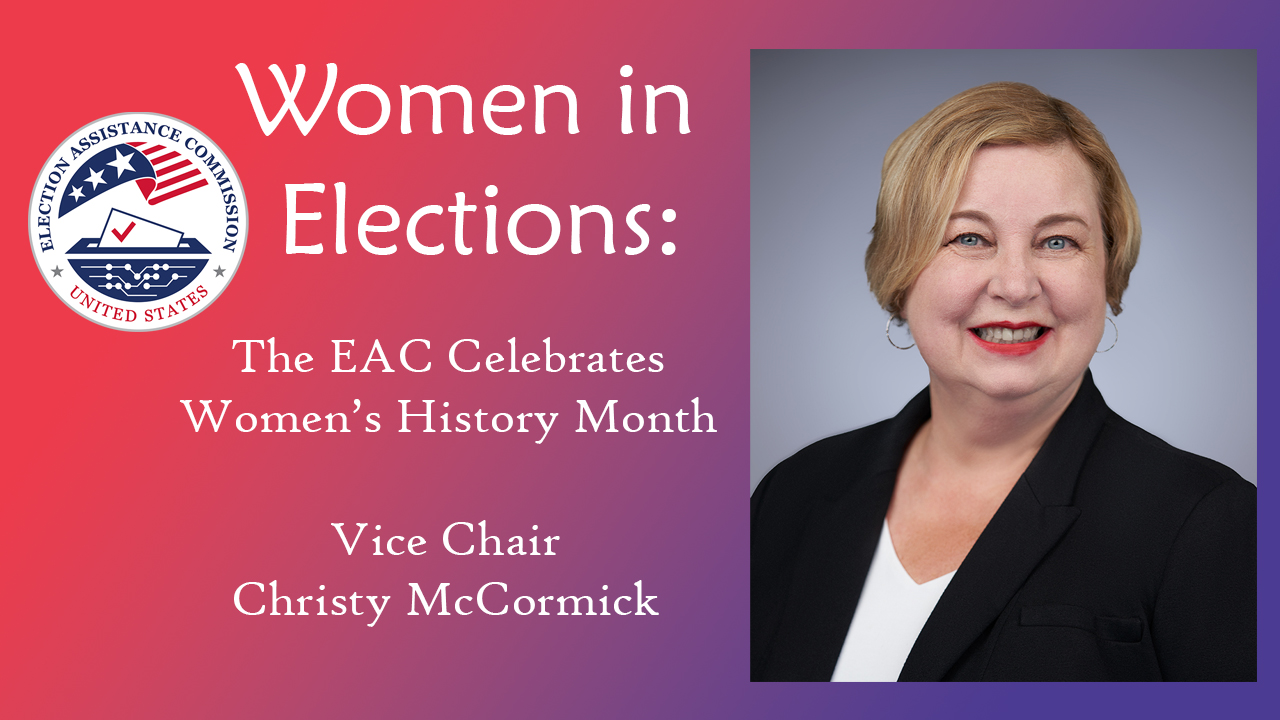 On August 26, 1920, U.S. Secretary of State Bainbridge Colby certified the 19th Amendment to the U.S. Constitution, granting women the right to vote.  It was the culmination of a seven-decade fight that would lay the groundwork for—and inspire—future generations of women to become actively engaged in the electoral process. In celebration of Women’s History Month, the U.S. Election Assistance Commission (EAC) honors the women who led the fight for the right to vote and the historic role women have played to ensure safe, fair, and accessible elections for all Americans.

Women’s rights didn’t enter the national conversation until 1848 when Elizabeth Cady Stanton and Lucretia Mott organized a convention in Seneca Falls, New York. The 300 attendees believed women deserved better education, more employment opportunities, and, above all, the right to vote. While the suffrage movement lost momentum amid the outbreak of the Civil War, two national suffrage groups – National Woman Suffrage Association and American Woman Suffrage Association – were formed in 1869.

Despite being divided over whether enfranchisement could best be achieved through a federal constitutional amendment or through individual state constitutions, the two groups would eventually merge with a state-by-state strategy to form the National American Woman Suffrage Association in 1890. Led by Carrie Chapman Catt, the movement achieved success with multiple states granting voting rights to women between 1910 and 1918. Stanton’s daughter, Harriot, followed in her mother’s footsteps -- organizing parades, and picketing in Washington, D.C. to raise awareness. Swayed by Catt, President Woodrow Wilson came out in support of enfranchisement in a speech on the U.S. Senate floor, stating, “I regard the extension of suffrage to women as vitally essential to the successful prosecution of the great war of humanity in which we are engaged.”

Two years later, the fight started by Stanton and Mott was finally won when women gained the right to vote. Not content to rest on their laurels, the suffragists mobilized women to register to vote in the 1920 election, running voter education efforts such as citizenship schools and setting up mock voting booths. Their efforts paid off—with over 8 million women across the nation casting their first votes. In the years that followed, women began to establish a prominent presence in election administration.

Over a century later, women are continuing that legacy by actively engaging in the electoral process as state and local election officials, and poll workers. They serve pivotal roles that ensure our elections run smoothly and fairly. Women are likewise leaders at federal agencies that address different aspects of the elections process including roles as commissioners at the EAC and the Federal Election Commission (FEC), director of the Cybersecurity and Infrastructure Security Agency (CISA), and Assistant Attorney General at the Department of Justice. And in the private sector, women hold leadership roles at companies developing voting systems and election technology. Throughout the country, women are a vital part of the success of our elections.