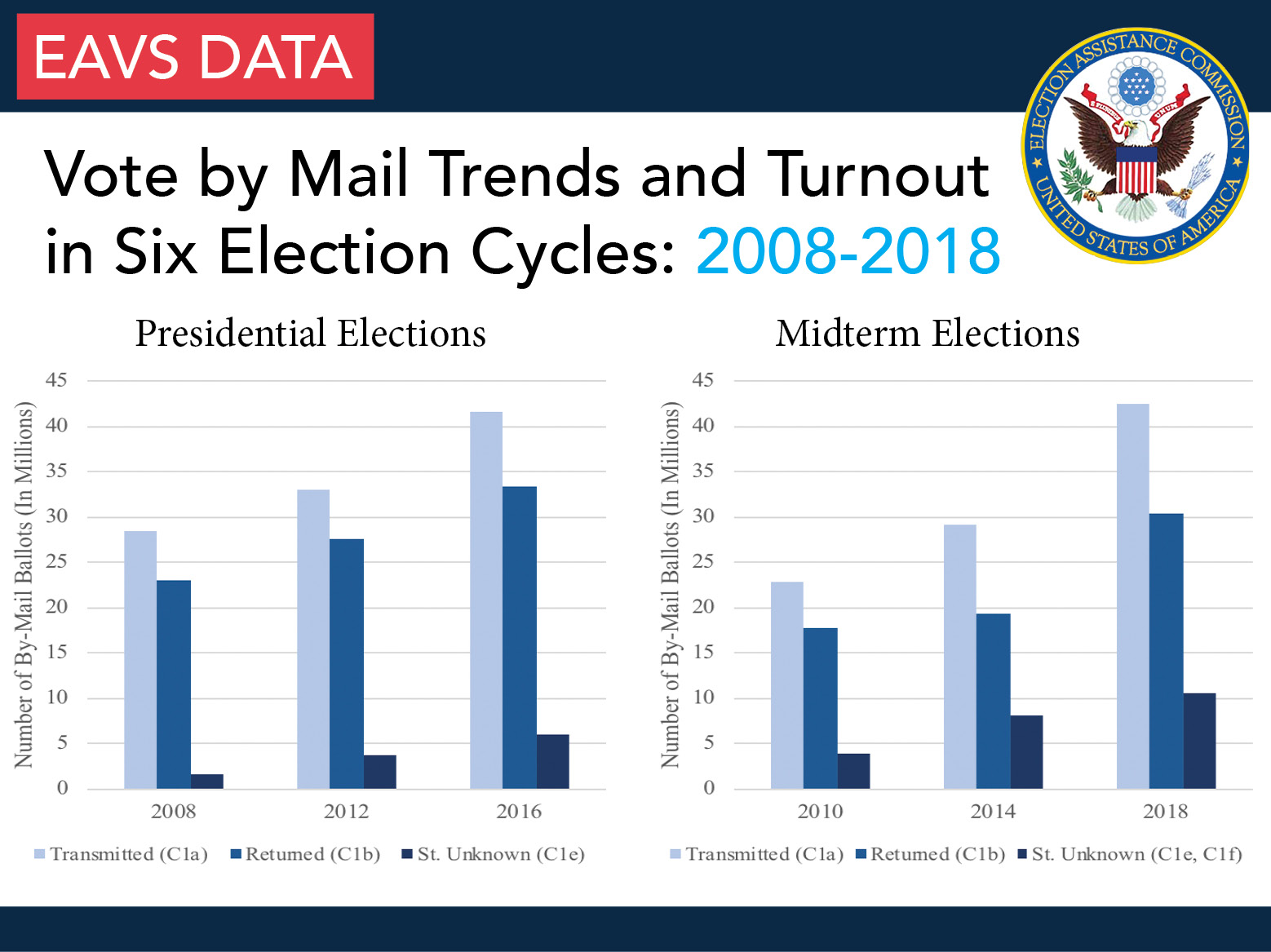 Many states are expanding and encouraging the use of vote by mail options for the 2020 elections, largely due to voter safety concerns posed by the COVID-19 pandemic. While these concerns have elevated the topic of voting by mail nationally, data shows that voters have utilized the option to vote absentee or by mail in increasing numbers for the last decade.

There are two ways in which states traditionally have allowed voters to vote by mail: absentee voting (where voters request an absentee ballot which, depending on the state, may or may not require an excuse) or establishing vote-by-mail for their jurisdiction (where all registered voters are automatically sent a by-mail ballot). While the method for requesting a ballot may differ, our analysis utilizes EAVS data to examine both vote by mail and absentee programs since 2008. Data shows that the growing use of voting by mail for the 2020 elections follows the upward trend of voters turning toward mail or absentee voting over the last decade.

The number of by-mail ballots sent to voters nationally increased from 28.5 million to 42.4 million between 2008 and 2018, while returned ballots rose from 23.1 million to 30.4 million. Although the totals rise and fall based on the type of election held that year, examining the data when separated as midterm or presidential election shows that the ballots transmitted and returned nonetheless increase within the election categories.

Figure 1. There was a steady increase in the number of by-mail ballots transmitted and returned, along with those with an unknown status between 2008 and 2018.

However, an analysis of the return rate shows a different picture. When calculating the rate of return, there was a decrease from 2008 to 2018, from 81.1% to 71.6% respectively. While a 10% decrease may be concerning, this follows the conventional pattern of presidential and midterm voter turnouts, where voters tend to turnout less in midterm years compared to presidential years.

The total number of votes cast by mail has grown as a proportion of total voter turnout. While each year fluctuates along the aforementioned presidential-midterm patterns, the overall rate of by-mail voting has increased in the last decade. In 2008, 23.1 million ballots were cast by mail out of a turnout of 132.8 million, representing 17.4% of total voter participation. By 2018, the national share of votes returned by mail had increased to 25.3% or 30.4 million votes out of 120.3 million total votes cast. This shows a gradual rise in the share of voters who cast their ballots by mail. While the percentage could have been expected to continue its steady growth in 2020, the COVID-19 pandemic will likely ramp up the pace as Americans look to vote without having to cast their ballot at a polling location in-person. It is unclear if the expected new trend will continue at the accelerated rate or resume the pace observed from 2008 to 2018.

Since the 2010 elections, over a majority of states and territories reported that less than 10% of voters casted their ballots by mail. The 2008 election was the only year where less than a majority (49%) of states reported fewer than 10% of mail voters. During the 2018 election, 31 states and territories (57.4%) reported less than a tenth of voters who participated by mail, which is the highest percentage of states in the last decade. It is expected that more voters will vote by mail in 2020, than ever before, if so then we should expect substantial increases in the states with a low percentage of mail voters.

Since the 2008 elections, over 95% of returned mail ballots were counted. The percentage of rejected mail ballots varies depending on the election year. In 2008, 4.5% of returned mail ballots were rejected which is the highest in the last decade. The rejection percentage has remained consistently below 1.5% since the 2010 election. In midterm years it has ranged between 1.3% (2010) and 1.4% (2014, 2018). It has consistently been 0.9% in the remaining presidential years (2012 and 2016). It is expected that the rejected ballot percentage will increase in 2020 as more voters are expected to vote by mail, some for the first time.

The top reason for ballot rejection in all the elections between 2008 and 2014 was that the ballot was not received on time or the deadline was missed. This was closely followed by the lack of a valid signature or non-matching signature. In the 2016 election, a non-matching signature was the top reason followed by the ballot missed the deadline. Lastly in the 2018 election, various “other” reasons were the most common reason for ballot rejection, some of these reasons included “the voter was not registered or eligible, the ballot was missing an important document…”, etc. “Other” reasons were followed by the ballot missed the deadline. It is difficult to say what reason will be the most common in 2020 but it is expected that some of these same top reasons will cause ballots to be rejected in this year’s election.

In the 2018 election, by-mail ballots constituted over 25% of total voter turnout. Due to the complications related to the COVID-19 pandemic, it can be expected that the proportion of ballots cast by mail for the 2020 presidential elections will greatly exceed the 1-2% increase per election year that has been the norm since 2008. As states work to identify ways to keep the 2020 election accessible, safe, and secure, by-mail voting will – and has – become an increasingly essential method to broaden participation in the democratic process.

Thank you to former EAC intern Samantha Ku for her work on this blog.