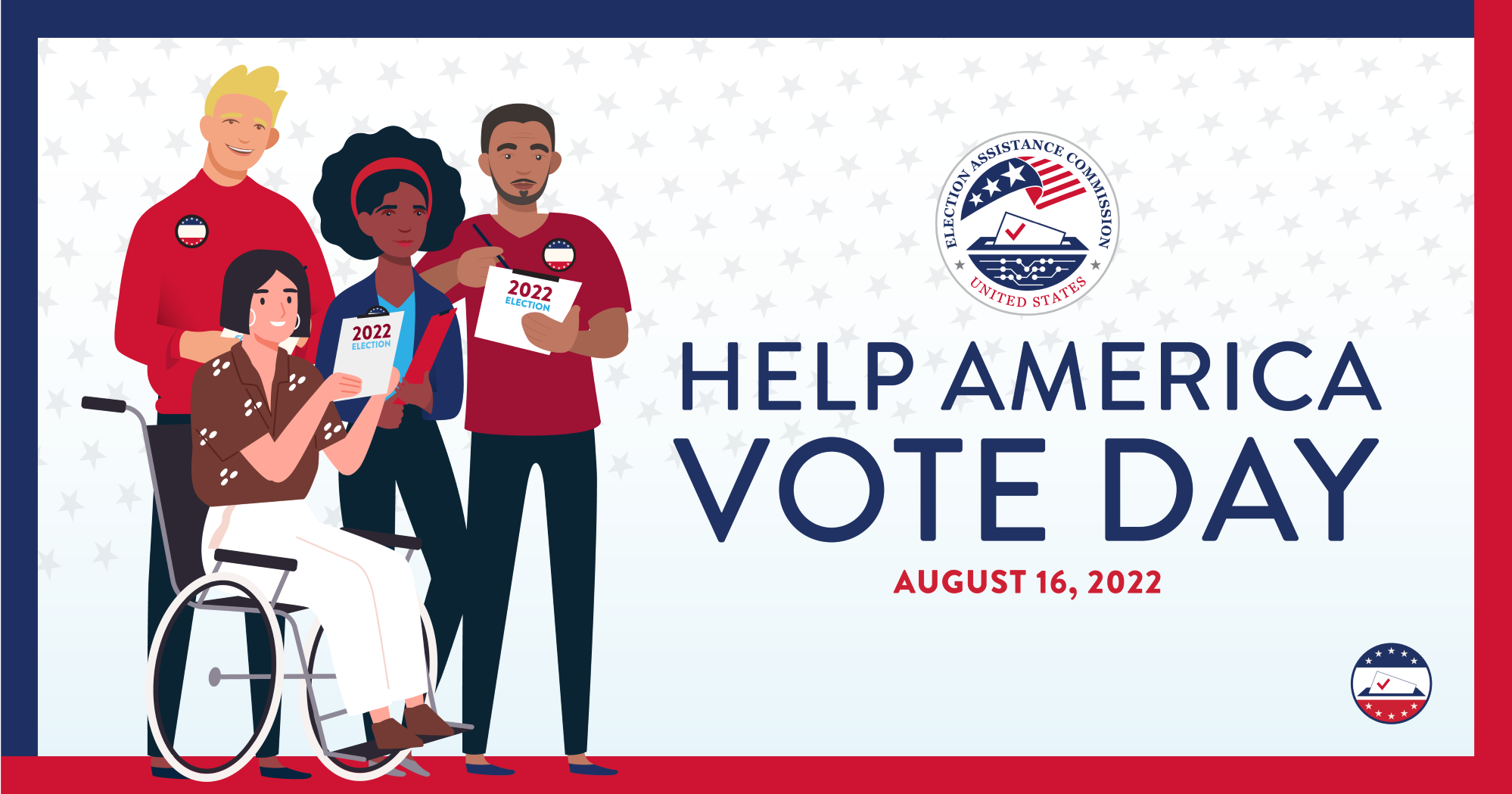 Established by the U.S. Election Assistance Commission, the event aims to raise awareness about the importance of poll workers and inspire more Americans to sign up.

Washington DC - In the lead-up to the 2022 midterm elections, and with the nation facing a continued shortage of election workers, the U.S. Election Assistance Commission (EAC) today designated August 16, 2022, as Help America Vote Day, a second day of action created following the success of January’s National Poll Worker Recruitment Day. Help America Vote Day aims to address the nationwide shortage of poll workers resulting from the COVID-19 pandemic, inspire greater civic engagement and volunteerism, and help ensure safe, secure, accessible, and transparent elections in 2022 and beyond.

"Since the signing of the Help America Vote Act (HAVA) 20 years ago there have been numerous fundamental improvements in election administration across the county.  HAVA also established the EAC, charging the agency to be a leader in the effort to modernize our voting systems and improve election administration and serve as a primary source of best practices and election information. Help America Vote Day will not only celebrate the anniversary of this historic legislation but will also shine a light on the invaluable role election officials and poll workers play in our election process. We are hopeful that Help America Vote Day will also raise awareness of the critical poll worker shortage facing our nation and encourage Americans to sign up to help voters cast their ballots during early voting and on Election Day. The EAC looks forward to continuing to support state and local election offices as they serve voters and ensure safe, secure, accessible, and accurate elections."

While the specific duties and compensation for poll workers vary depending on location, most jurisdictions task election workers with setting up and preparing the polling location, welcoming voters, verifying voter registrations, and issuing ballots. Poll workers also help ensure voters understand the voting process by demonstrating how to use voting equipment and explaining voting procedures. Election staff and poll workers are overseen by local election authorities, which also provide training in advance of Election Day.

An aging population of election workers and residual health concerns of COVID-19 have resulted in recurring shortages of poll workers.  There are millions of Americans, including many voters with disabilities, who intend to cast a ballot during early voting or on Election Day. Having an adequate number of poll workers to staff polling places on and before Election Day will ensure voters receive the assistance they need at the polls, reduce the potential for long lines or congestion and help provide a positive and smooth voting experience for all voters.

HelpAmericaVote.gov has a lookup tool for poll worker information for local jurisdictions, information on what being a poll worker entails, and a toolkit and graphics to help anyone join in Help America Vote Day.

The U.S. Election Assistance Commission (EAC) was established by the Help America Vote Act of 2002 (HAVA). It is an independent, bipartisan commission charged with ensuring secure, accurate and accessible elections by developing guidance to meet HAVA requirements, adopting voluntary voting system guidelines, and serving as a national clearinghouse of information on election administration. The EAC also accredits testing laboratories and certifies voting systems, as well as administers the use of HAVA funds. For more information, visit www.eac.gov.