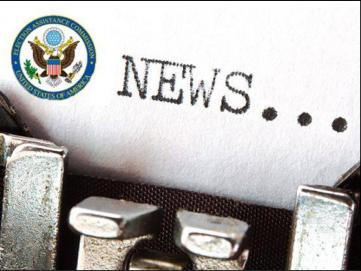 “Since joining the EAC, I have had the privilege of visiting with state and local election officials from across the country to learn more about the work they are doing to conduct secure, accurate and efficient elections. This experience gives me great confidence in the dedicated men and women who run our elections,” said Chairman Benjamin Hovland. “As I take on the role of Chairman, I look forward to working with the other commissioners to ensure the EAC does all it can to better serve voters and election officials by being a valuable resource to help improve election administration across the country.”

Chairman Hovland identified the following areas that will inform his priorities for the coming year, including:

Chairman Hovland is replacing Commissioner Christy McCormick as Chair of the EAC Commissioners.

"It was an honor to serve as Chairwoman of the EAC over the past year. During that time, the EAC supported the administration of $380 million in 2018 HAVA security grants and recently began the process to distribute $425 million in 2020 HAVA grants. We made strides toward approval of the VVSG 2.0 guidelines and secured increased funding to support EAC operations," said previous Chairwoman, Commissioner Christy McCormick, "2020 will be a critical election year and I look forward to continuing to work alongside my fellow commissioners and the EAC team as we work to improve election administration for the coming year and beyond."

Benjamin Hovland was nominated by President Donald J. Trump and confirmed by unanimous consent of the United States Senate on January 2, 2019 to serve on the U.S. Election Assistance Commission (EAC). Chairman Hovland serves as the Designated Federal Officer for the Technical Guidelines Development Committee (TGDC).

Earlier in his career, as the Deputy General Counsel for the Missouri Secretary of State's office, he focused on legal issues related to the administration of state and federal elections, including recounts, poll worker training, voter registration list maintenance, statewide database matching, voter education resources and ballot initiative litigation. Hovland was part of the team that developed a new voter friendly web portal to help Missourians get registered, update their registration, and find their polling place. He also oversaw the development and implementation of a new voter education program, which alerted Missourians who appeared on the U.S. Postal Services’ national change of address list that they may need to update their voter registration. The program resulted in hundreds of thousands of Missourians registering to vote or updating their registration. He also engaged with the Pew Charitable Trust’s effort exploring ways to improve voter registration lists, resulting in the Electronic Registration Information Center (ERIC), which is now utilized by over 20 states to make their voter rolls more accurate and reach out to millions of unregistered Americans.

As an attorney for the Fair Elections Legal Network, Hovland’s energies were focused on protecting Americans’ access to the ballot box. Thanks to his efforts, the court struck down a misleading ballot title that may have led to additional barriers to voter participation in Missouri, keeping it off the ballot. In Florida, he litigated to stop efforts to purge voters from the rolls based on inaccurate data matching in the lead up to the election.