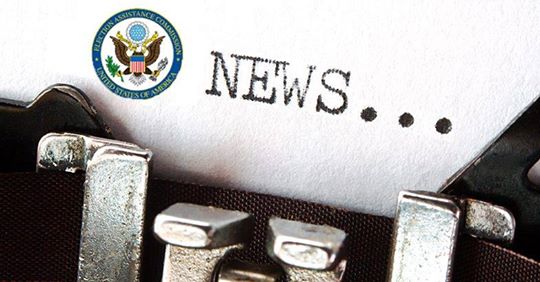 Silver Spring, Md. – The U.S. Election Assistance Commission (EAC) today announced that The District of Columbia Board of Elections was a recipient of a 2019 Clearinghouse “Clearie” Award for Improving Accessibility for Voters with Disabilities for their overall commitment to accessibility. Born of the EAC’s mandate to serve as a national clearinghouse of information on election administration, the annual “Clearie” awards recognize best practices in election administration and highlight exemplary models which can serve as examples to other officials and jurisdictions.

“Presidential election years present unique challenges for election officials and voting has already begun in the Nation’s first primary," said EAC Chairwoman Christy McCormick. "We are excited to announce the Clearie awards to recognize election officials across the country who did exceptional work to improve accessibility in 2019, while they buckle down for a busy election year. The recipients of these awards displayed ingenuity and creativity in their service to voters with disabilities and election workers, and they are outstanding examples for other election administrators. On behalf of myself and my three fellow Commissioners, I congratulate their achievements and look forward to seeing their contributions from 2019 continue in the 2020 elections and beyond."

The DC Board of Elections works diligently to ensure the accessibility of the voting process for voters with disabilities. The elections office has worked to implement new voting machines, an electronic absentee ballot marking system, surveys to capture feedback on ADA compliance at polling places, and poll worker training, all focused on helping voters with access needs. Other accomplishments include eliminating barriers to voting such as inaccessible polling sites, curbside voting, and no excuse absentee voting. In 2018, an independent organization surveyed all DC polling places and found 98% offering outstanding physical access for voters with disabilities.

More information on the DC Board of Elections’ submission can be found here.