This survey contains the most comprehensive data about trends in election administration in the United States and provides these numbers at the national, state and local level. This brief is part of a series of “deep dives” into the EAVS data that will provide an in-depth look at a variety of issues related to administering elections  and use data to help better understand these issues. 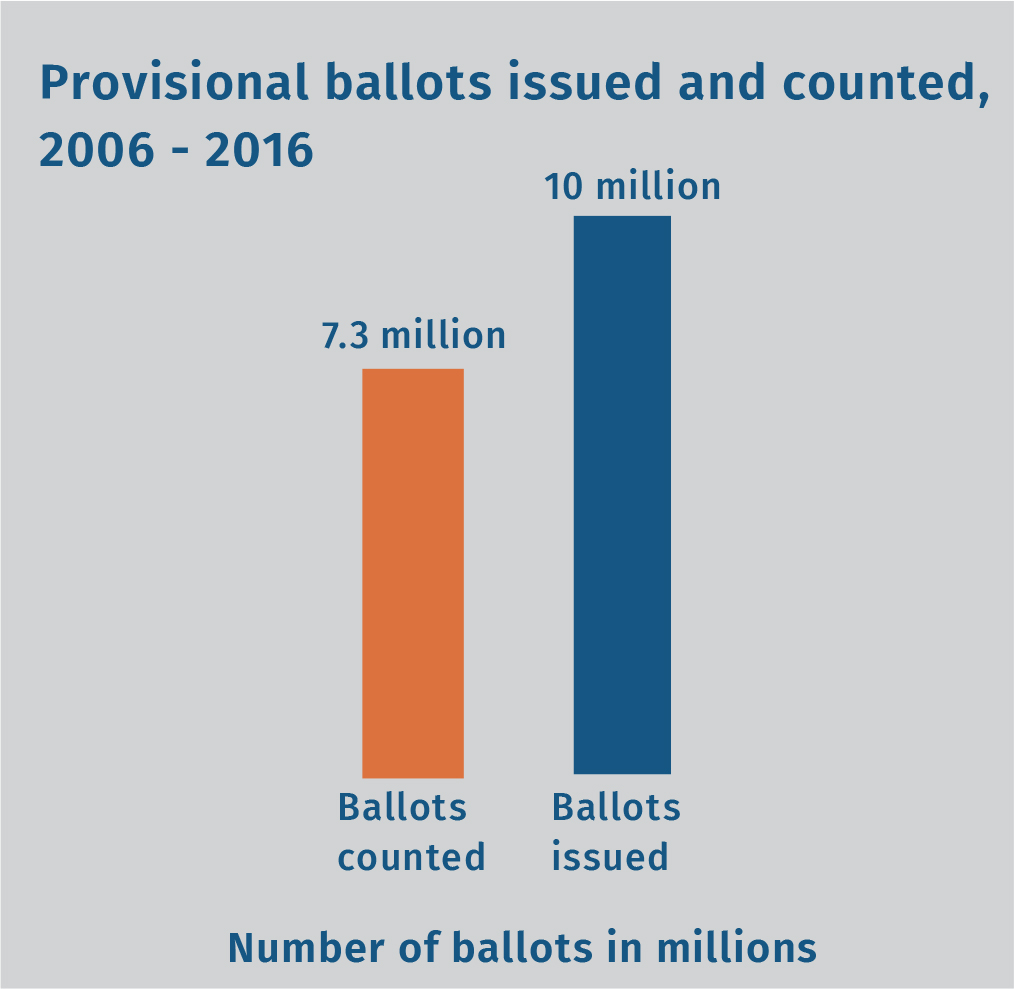 A key provision of the 2002 Help America Vote Act (HAVA) mandated provisional voting in nearly every state.1 This was included to provide a failsafe process for voters if their eligibility is in question when they are attempting to cast a ballot. During the 2000 elections, prior to HAVA, 17 states and the District of Columbia offered provisional voting.2

A provisional ballot is issued when there is a question of an individual’s eligibility to vote. Often, this is because the person is not on the official list of registered voters when they are attempting to cast a ballot in a particular election. Once cast, provisional ballots are kept separate from other ballots and are not tabulated until the eligibility of the voter is confirmed within a certain time after Election Day. Provisional ballots where the voter is determined to be ineligible are rejected and not counted. HAVA also requires state or local election officials to provide a free access system, such as a toll-free phone number or website, for people to check if their provisional ballot was counted and if it was not, why not.

The EAVS has detailed provisional voting data for three presidential election cycles and three midterm election cycles.3  During this time, from 2006 to 2016, states and territories reported that more than 10 million provisional ballots were issued and more than 7.3 million of these were counted. The rate of use – the number of provisional ballots cast out of all ballots cast – has remained consistent nationally over this period of time. However, the rates during presidential cycles are higher than midterm cycles. 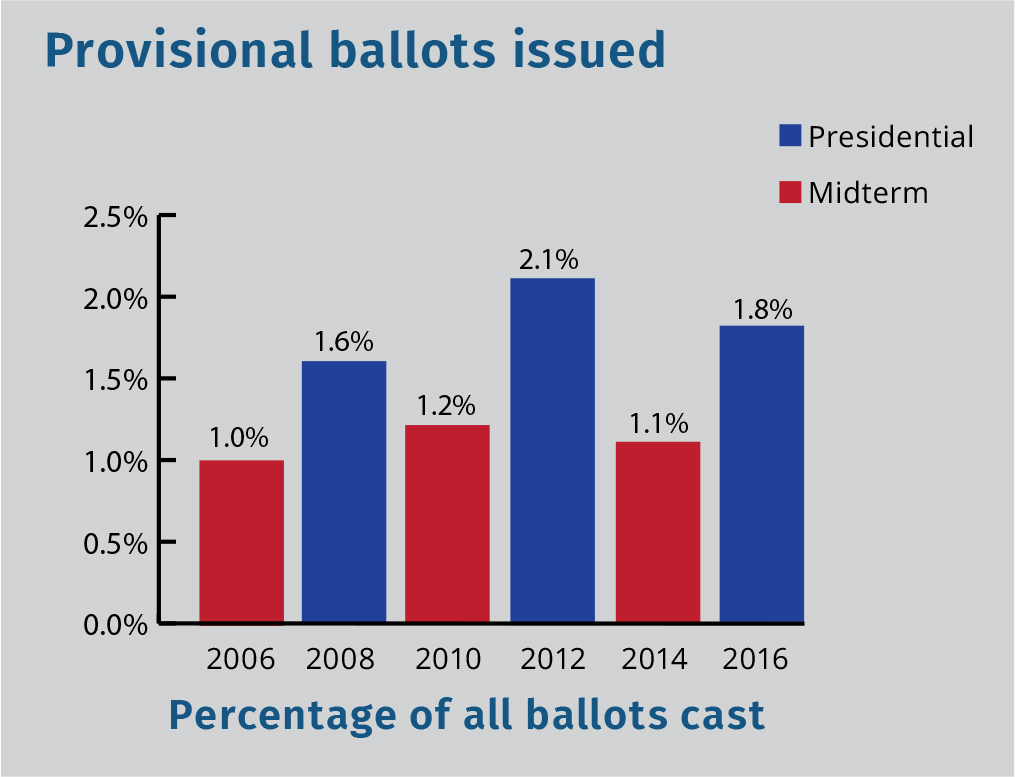 One reason for the higher rate in California is provisional ballots are issued to voters who have moved within their county without re-registering to vote. State law requires the ballot be counted if the voter’s signature on the provisional ballot envelope matches the signature on the voter’s prior registration form. The local election official is also required to re-register the voter at their new address for future elections. Additionally, those who have requested a mail ballot and show up at the polls saying they did not receive a ballot can vote provisionally. These votes are counted if it is verified later that indeed they did not cast their mail ballots.6  In 2016, approximately 80 percent of provisional ballots were counted in full or in part in California.

Other states have seen provisional ballot numbers shift dramatically due to policy changes. In 2013, a law was passed in Colorado allowing for all voters to receive mail ballots or cast ballots during an early voting period or on Election Day at a voter service and polling center. These centers allow for a voter to cast a ballot anywhere in the county, not at one assigned polling place location, meaning if a voter casts a ballot in the correct county, it is not possible to show up at the wrong precinct.

There is also variation in the rates of issuing and counting provisional ballots within some states. While EAVS data does not necessarily provide specific reasons for this variation, it does help point to areas for further research.

In April 2018, the New Mexico Secretary of State’s office adopted a new administrative rule related to provisional ballots to codify “best practices regarding provisional voting so that the procedures are the same in every county,” offering guidance on each step of the process.11  Future iterations of the EAVS will hopefully provide some insights on the impact of this rule change.

Beyond New Mexico, moving forward the EAVS will help capture the impact of changing policy in other states as well. 2018 will be the first time that a new process called Conditional Voter Registration (CVR) will be used statewide in California. This allows any eligible citizen in the state, from 14 days prior through Election Day, to go to their county elections office and conditionally register to vote. The voter is given a voter registration affidavit to fill out and is then given a ballot that must be placed in a CVR envelope to be handled in a similar process to that of vote by mail ballots in the state.12

Since by far the most provisional ballots are issued to voters in California, this shift in policy will undoubtedly not only impact the state’s data, but national figures as well. In 2018 and beyond, the EAVS will measure the impact of this change and others and continue to be the sole source of provisional ballot data nationwide.

3. This is data from 2006 to 2016. The EAVS was first administered in 2004 but the 2004 survey did not ask for detailed data about the reasons provisional ballots were rejected and is not included in this analysis.

7. According to the Kentucky State Board of Elections (see https://vrsws.sos.ky.gov/provweb/), the following are reasons provisional ballots can be issued: