This survey contains the most comprehensive data about trends in election administration in the United States and provides these numbers at the national, state and local level. This brief is part of a series of “deep dives” into the EAVS data that will provide an in-depth look at a variety of issues related to administering elections  and use data to help better understand these issues.

Since the EAC was established in 2002, digital technology has significantly changed the way elections are administered in the United States. Computerized statewide voter registration databases have been adopted in all states with voter registration. Online voter registration has spread to nearly three-fourths of the states. The use of e-poll books is on the rise. Lever and punch-card machines have been phased out and electronic voting equipment that allows voters to cast, and election officials to count, ballots has spread to every corner of the country. More recently, there appears to be a gradual decrease in the use of paperless voting systems.

These technological changes have considerable implications for election efficiency and integrity, voter experience and confidence, accessibility, and the roles of election officials at all levels. This rings especially true today as election officials across the country seek to modernize and better secure their election systems in the aftermath of the 2016 elections. The following EAVS Deep Dive examines data on election technology from across the country to support and inform these efforts.

For the 2016 elections, OVR was offered in 31 states, the District of Columbia and Guam. Since that time, six additional states — Florida, Idaho, Ohio, Rhode Island, Tennessee and Wisconsin — have implemented OVR. Oklahoma enacted OVR in 2015, but has not yet implemented it. This leaves 11 states and three territories that have neither enacted nor implemented OVR, including the heavily populated states of Michigan, New Jersey, North Carolina and Texas.

Number of states and territories with OVR 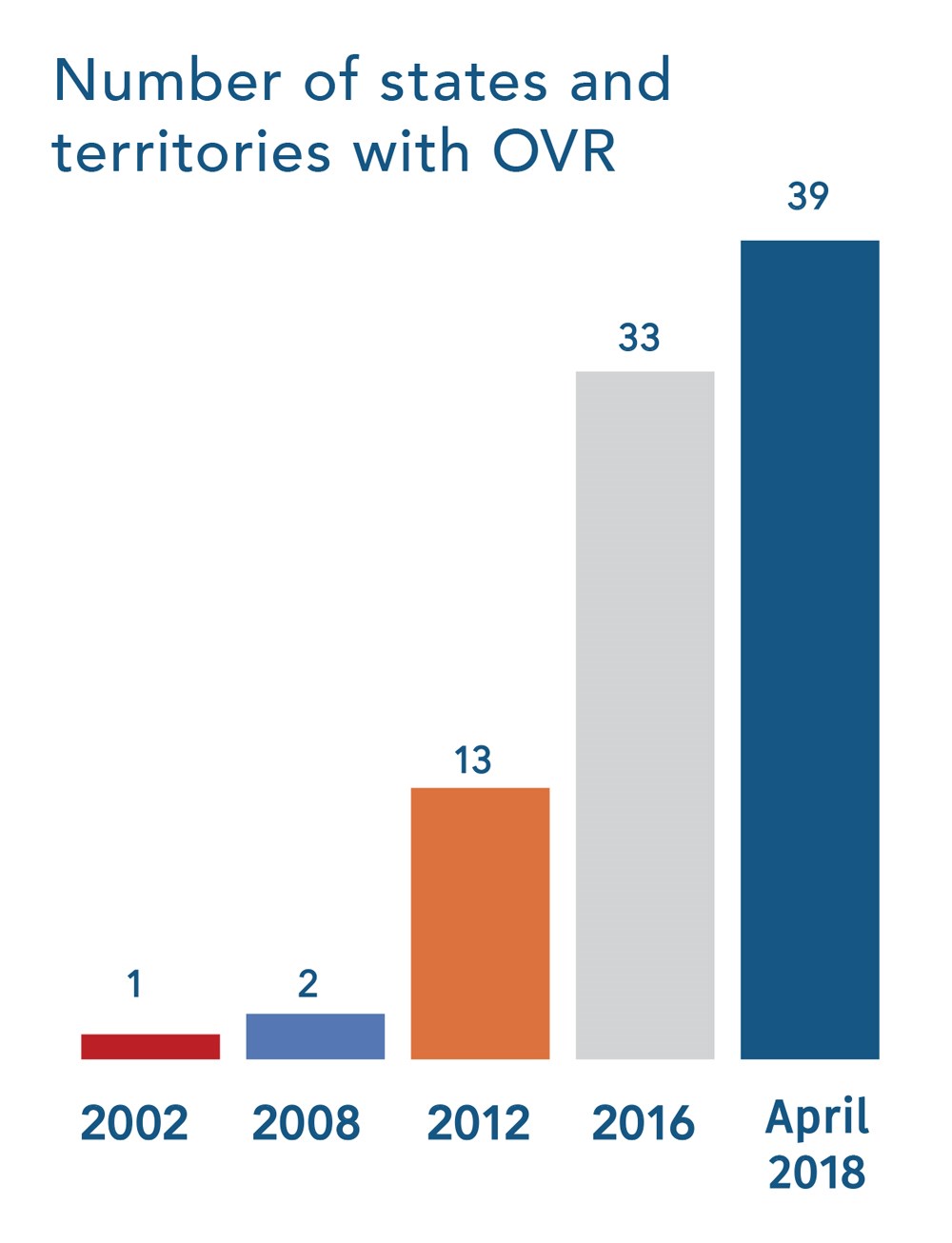 According to EAVS data, 17.4 percent of all voter registration applications were processed online for the 2016 elections.4 This was more than triple the rate from 2012, when only 5.2 percent of applications took place via OVR.

The greater computerization of voter registration lists described above is also changing how voters are checked in at the polls. 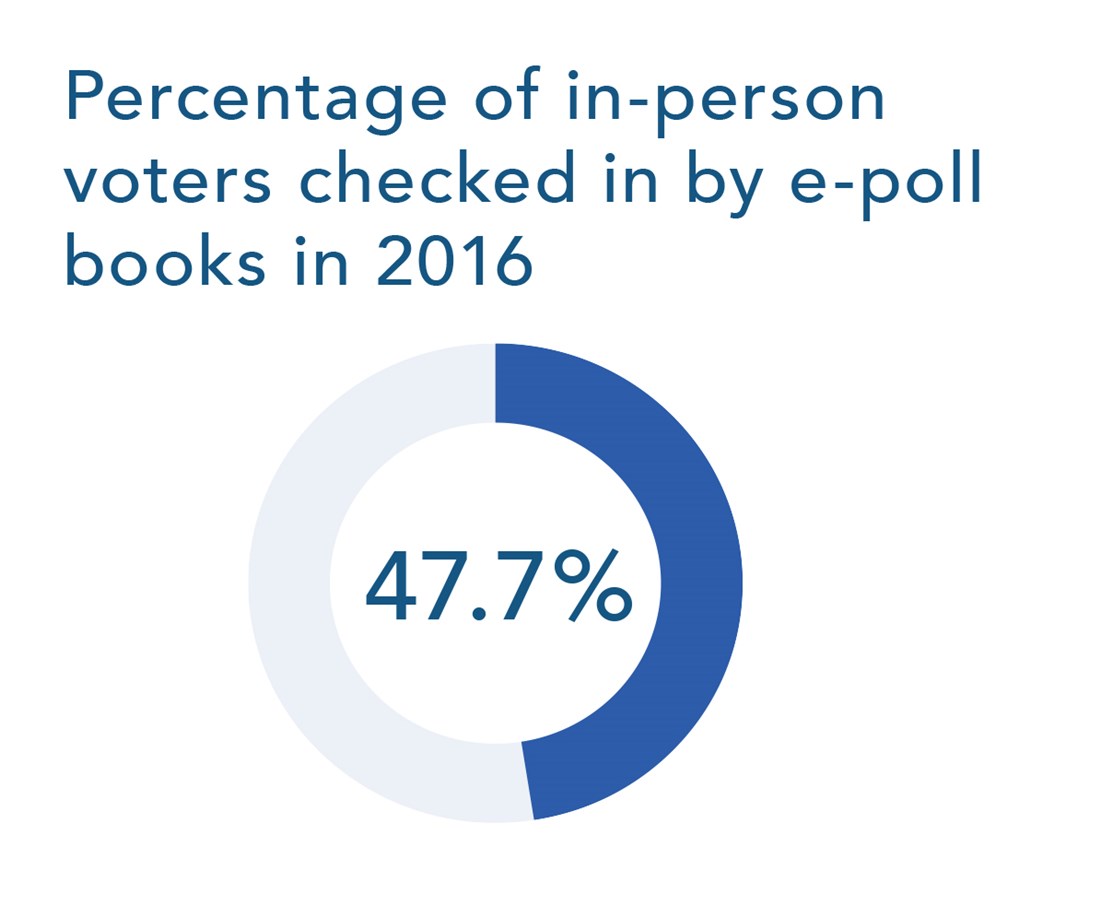 At least 32 states, the District of Columbia and the U.S. Virgin Islands reported using e-poll books in at least one jurisdiction in the 2016 elections.7  Five states — Colorado, Georgia, Maryland, North Carolina and South Carolina — utilized e-poll books in all jurisdictions statewide. A handful of additional states had e-poll book usage to sign in voters in at least two-thirds of their jurisdictions in 2016, including Michigan (97.6 percent), Florida (83.3 percent), Iowa (74.4 percent), Arizona (73.3 percent) and New Mexico (69.7 percent).

The methods by which voters cast their ballots, and election administrators count them, have also undergone considerable changes in recent years. To help the nation better understand these changes, the EAC has been collecting information on voting technology since the first EAVS on the 2004 elections.

Building on questions in use since the 2008 survey, the 2016 EAVS asked about the eight categories of voting systems listed below. Definitions for these systems are provided in Appendix I. While the terminology used for voting technology continues to evolve, this categorization allows for some level of comparisons and trend analysis over time.

In 2016, election offices used a range of voting systems, which primarily included optical scan machines, hybrid machines and DREs, both with and without a VVPAT.12 Voting systems that include a paper component were most prevalent in 2016, and the use of paperless systems appears to be gradually decreasing over time.

Used by roughly 61 percent of jurisdictions in 2016, EAVS data shows that optical scan machines (which scan paper ballots or paper records) are the most popular type of voting equipment in the country.

EAVS data also shows a gradual increase over time in the use of hybrid voting machines (which create paper ballots or paper records that are then scanned). In 2008, approximately 29.8 percent of jurisdictions reported using hybrid machines.13  This grew to 33.2 percent in 2012 and further to 34.1 percent in 2016.

Only five states reported using DREs without a VVPAT statewide exclusively for in-person voters during the 2016 elections: Delaware, Georgia, Louisiana, New Jersey and South Carolina.16   Fifteen states in total reported using these voting machines in some of their jurisdictions in 2016.17

EAVS data has helped illustrate the changing landscape of voting system usage across the country and the evolving terminology in this space. Recent surveys also helped reveal the rapid expansion of online voter registration and e-poll book usage across the country. Information collected through the EAVS Statutory Overview has further informed our understanding of how voter registration databases function across the states. Future surveys will continue to collect data on these issues as states grapple with balancing the efficiency and accessibility gains of these technologies against heightened security concerns.

As paper-based and auditable systems have received renewed attention following the 2016 elections and the replacement of aging voting equipment remains a persistent challenge for election officials, the EAVS will continue to capture data on this important topic and provide a better understanding of changes in this area.

On March 23, 2018, Congress appropriated $380 million in election security grants, made available to all 50 states, the District of Columbia, Puerto Rico, Guam, American Samoa and the U.S. Virgin Islands, to improve administration of elections for federal office, including to enhance election technology and make election security improvements. Just as EAVS data helped us understand the impact of HAVA funds on the states’ use of election technology following the 2000 elections, future surveys will help tell the story of how these grants are implemented and their impact on election technology usage across the country.

This report was updated from its original version on June 8, 2018 to correct an error. The earlier version stated that 1.97 million voters were checked in with e-poll books in 2012 and 4.14 million were in 2016. The corrected figures are 19.7 million and 41.4 million, respectively. The EAC research team regrets this error.

1 North Dakota is exempt from this requirement because it does not conduct statewide voter registration. North Dakota does, however, maintain a computerized statewide list of those who have voted.

2  See this EAC blog post and the states’ Statutory Overview responses for more information on how voter registration databases function in each state (e.g. as top-down, bottom-up or hybrid systems). The responses also have information on how states compare and verify records with other government-operated databases, such as vital statistic agencies, the Social Security Administration and departments of Motor Vehicles.

3  A 2017 Kansas Secretary of State’s office presentation showed 30 participating states in 2016. Since 2016, one state has reportedly joined the Crosscheck initiative, while four states have withdrawn their participation.

6  The calculation used here excludes the 17.6 percent  of jurisdictions (1,432 jurisdictions) that did not provide sufficient data on the relevant EAVS questions for 2012.

8  In total, 5,600 of 6,467 jurisdictions responded sufficiently to the relevant questions on in-person voting and e-poll book usage.

9  This is labeled an “electronic vote selection, printed and optically scanned ballot” system in the survey. See the full definition in Appendix I. It is a “hybrid” in the sense that it allows a voter to mark their ballot like a DRE, but produces a paper record to be tabulated through an optical scan or similar sensor.

10  A minute number of jurisdictions reported using lever systems through 2014, including two jurisdictions in 2008, one in 2010, one in 2012 and one in 2014. Responses beyond 2008 appear to be erroneous as they conflict with previous years’ reporting on the questions.

11  Two jurisdictions reported using punch-card systems in 2016, but these responses appear to be erroneous as they conflict with previous years’ reporting on the questions.

16  Four of these five states reported using a small number of optical scan machines in each of their jurisdictions, which were used to process absentee  or provisional ballots.

17  Two additional states reported having jurisdictions with this voting equipment, but information from the chief election office in the states shows the EAVS responses to be erroneous.

The following definitions of voting system categories was included in the 2016 EAVS Supplemental Instruction Manual.

Direct recording electronic (DRE) voting machines without a voter-verified paper audit trail: A voting system (push-button or touch screen) that records votes by means of a ballot display provided with mechanical or electro-optical components activated by the voter, where voting data are stored in a removable memory component. DRE is also referred to as an “electronic” voting system.

Direct recording electronic (DRE) voting machines with a voter-verified paper audit trail: A voting system (push-button or touch screen) that records votes by means of a ballot display provided with mechanical or electro-optical components activated by the voter, where voting data are stored both in a removable memory component and on a paper document that the voter can review before officially casting his or her ballot.

Hybrid or Electronic vote selection— printed and optically scanned ballot: A vote selection system (push-button or touch screen) in which the voter selects candidate choices by means of a ballot display provided with mechanical or electro-optical components activated by the voter, but no voting data is stored in the system. Instead, a paper ballot is printed that contains marks in voting response fields that are read by an optical scanner or similar sensor.

Optical scan: A system of recording votes by marks in voting response fields on ballot cards that are read by an optical scanner or similar sensor. These are also referred to as “mark-sense” voting systems.

Punch cards: A system of voting by punching holes in a card with a supplied punch device to indicate candidate or ballot issue choice. The ballots are counted using a computer punch card reader.

Lever machine: A system where each candidate or ballot issue choice is assigned a particular lever in a rectangular array of levers on the front of the machine. The voter pulls down selected levers to indicate choices. Vote totals are kept on a counter wheel within the machine.

Hand-counted paper ballots: A system where voters mark a paper ballot by hand and then each race on each ballot is counted by hand, without the use of a scanner, tabulator, or sensor.