Polling places and the poll workers who run them are the front lines of American elections. According to the EAVS, during the 2016 elections, local election officials operated 116,990 polling places, including 8,616 early voting locations, across the country. These polling sites were operated by 917,694 poll workers.

Recreating this framework every election cycle is a massive undertaking, and election officials and policymakers are constantly looking for ways to strengthen the process. This EAVS deep dive examines data on poll workers and polling places from across the nation to support and inform these efforts.

Recruitment, training, management, and retention of poll workers require constant and large-scale efforts by election officials. While EAVS data only scratches the surface of this challenge, the biennial survey does collect information in a few important areas, including the level of difficulty in obtaining poll workers and age of poll workers. 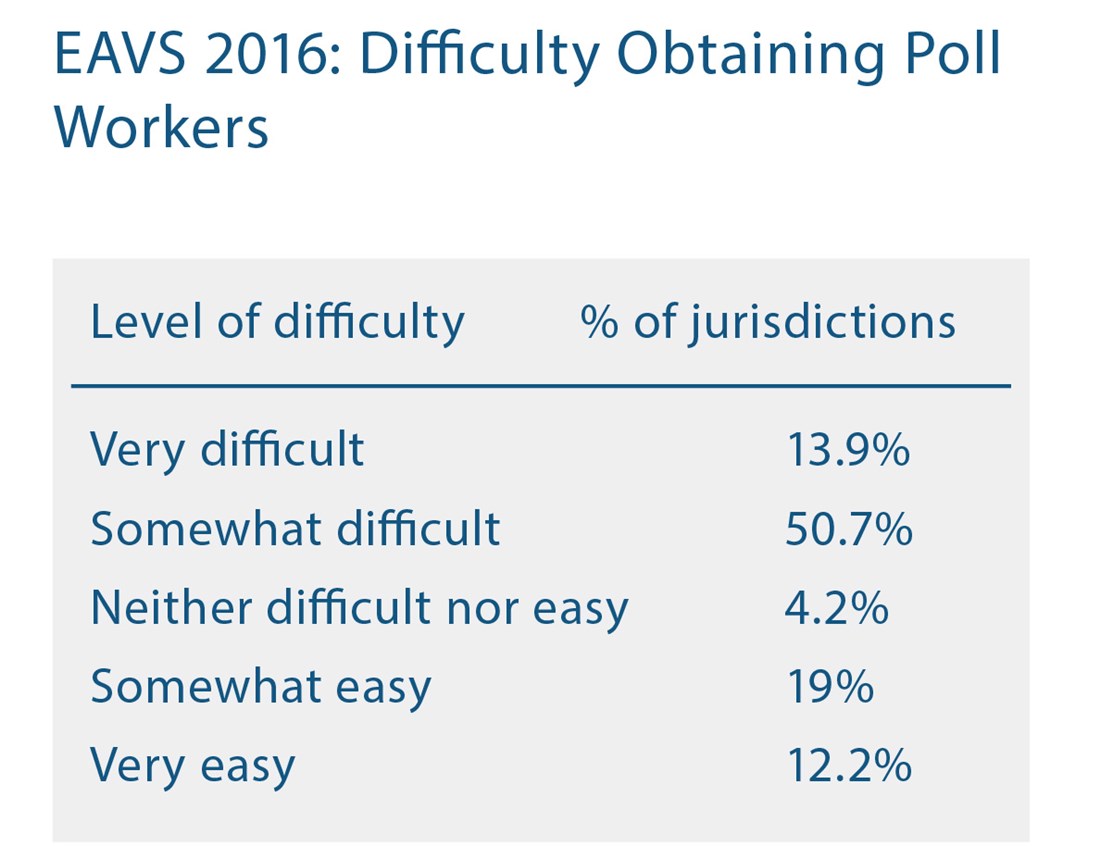 Recruiting young poll workers has been a focus of policymakers and election administrators for many years. The Help America Vote Act of 2002 (HAVA) sought to encourage high school and college students to serve as poll workers, and the EAC has supported these efforts since its inception.3  As highlighted in the EAC’s Election Workers: Successful Practices manual, young poll workers bring multiple benefits to polling operations. In addition to representing the next generation of poll workers, young poll workers are generally more comfortable with new technology, their energy and enthusiasm is often well received by older poll workers, and exposure to the voting process can stimulate interest in elections and help create lifelong voters. 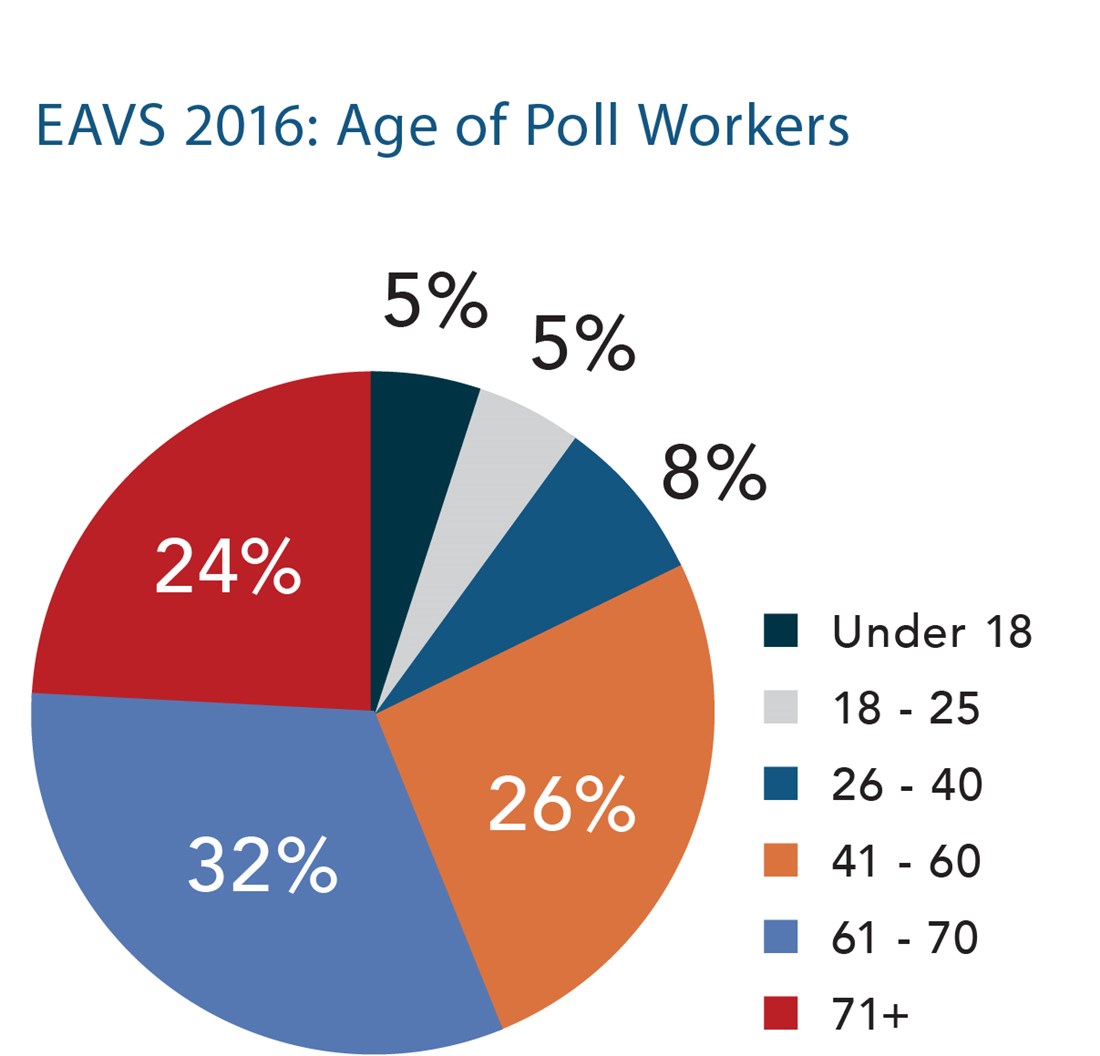 In 2016, the EAC recognized Hamilton County Board ofElections in Ohio with an Election Clearinghouse Award (a “Clearie”)for its “Youth at the Booth” program that recruited high school students to serve at the polls. Hamilton County officials credit these young poll workers as playing an important role in the county’s recent successful transition to electronic poll-books. EAVS data shows that Hamilton County reported having only four poll workers under the age of 18 in 2012, representing one-tenth of one percent of its total. By 2016, the county had increased this figure to 295 such poll workers, representing nearly 12 percent of its total.

The EAC expects to share additional good practices in this area later this year from winners of the 2017 “Clearies” competition that includes a category for recruiting, training, and retaining election workers.

As discussed in the EAVS Deep Dive on Early, Absentee, and Mail Voting, the “where” and “how” of voting in the U.S. is changing considerably. As states and individual election jurisdictions adopt alternatives to in-person voting on Election   Day (i.e. early, absentee, and mail voting) and/or shift from traditional precinct-based polling places to “vote centers,” the concept of the polling place itself is evolving.4 EAVS data can help paint a picture of this evolving landscape. 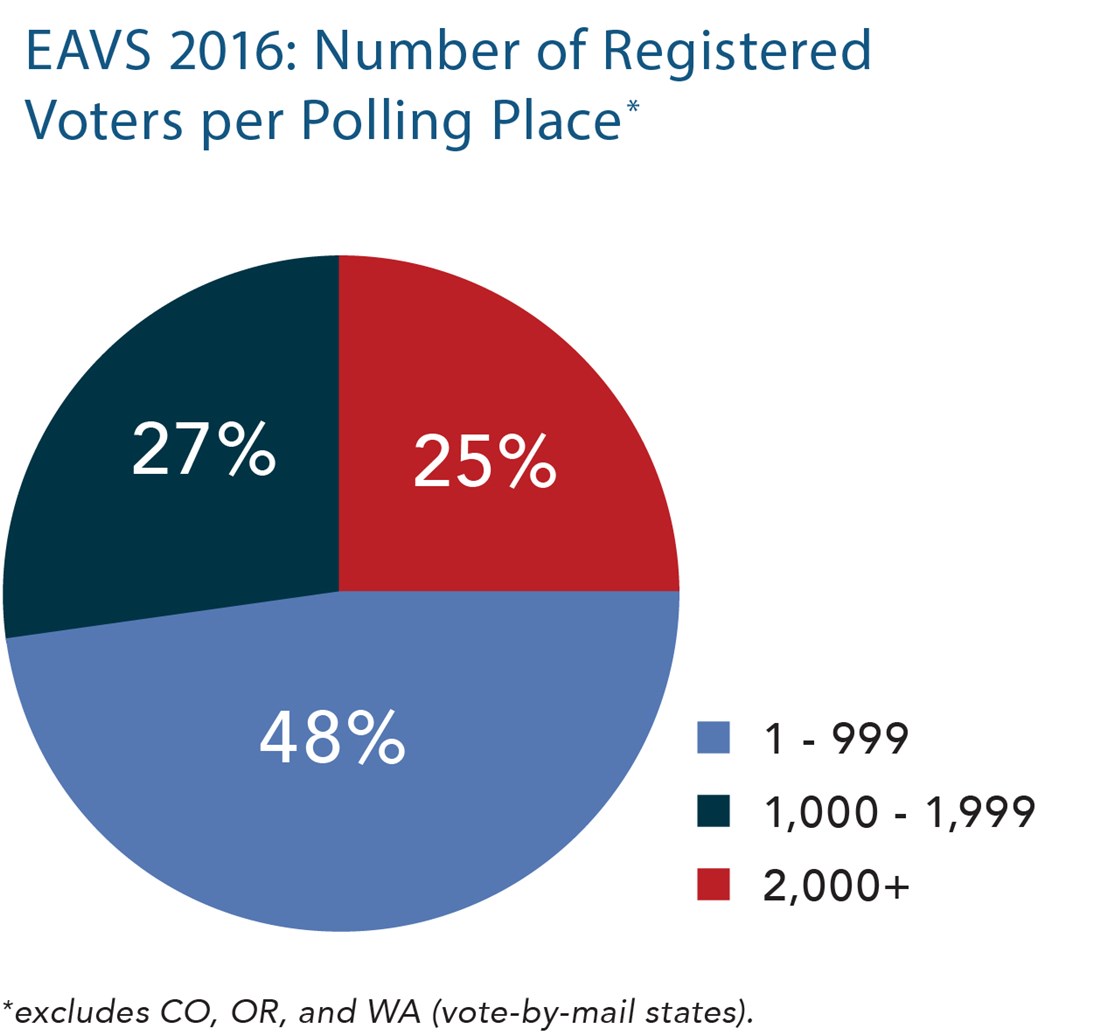 Number and Types of Polling Places

Local election officials operated more than 116,990 polling places during the 2016 elections.5 This represents a continued decrease from recent presidential election years, falling from more than 119,968 polling places operated in 2012 and more than 132,237 polling places in 2008. This decrease can likely be explained by the expansion of alternative voting options (e.g. absentee, early, and mail voting), the increased use of these options by voters, and the corresponding decrease in in-person voters on Election Day. The percentage of voters who cast ballots in ways other than in-person on Election Day more than doubled from 2004 to 2016, rising from one in five of all ballots cast to two in five of all ballots cast. The expanded use of “vote centers” in multiple states has also presumably contributed to the decreasing numbers of polling stations.

Colorado, which enacted large-scale changes to its election processes in 2013, has contributed to this trend. Under Colorado’s new model, all registered voters are mailed ballots for most elections and “vote centers” have replaced traditional polling places. Unsurprisingly, EAVS data shows a considerable decrease in polling locations utilized in Colorado in recent elections, dropping from 1,237 in 2012 to 301 in 2014 and further to 288 in 2016.

EAVS data can also show how voters are generally allocated among polling places. 2016 data demonstrated wide variation among and within the states on this issue. For example, excluding the three states that send all voters a mail ballot (i.e. Colorado, Oregon, and Washington), 25 percent of reporting jurisdictions had an average of more than 2,000 registered voters per polling place, 27 percent had between 1,000 and 2,000, and 48 percent had less than 1,000. The overall average of registered voters per polling station in these jurisdictions was 1,547.6

EAVS data from 2016 and previous surveys revealed that poll worker recruitment is an enduring challenge for election officials. As policymakers and election officials work to address this challenge, including by encouraging young people to serve as poll workers, the EAVS will continue to capture data on these issues that can inform election administration efforts.

EAVS data from 2016 has also helped illustrate the changing landscape of polling operations across the country, such as the  decreasing number of polling stations used in presidential elections. Future surveys will continue to collect data on this issue and provide a better understanding of this emerging trend.

1 Forty-nine percent of jurisdictions reported level of difficulty data to this EAVS question. The remaining jurisdictions responded that: the question was not applicable (18 percent); or they did not have enough information to answer or the data was not available (33 percent).

2 While this represented a notable increase from 2012 (when 41 percent was reported), the incompleteness of this data has obvious limitations for analysis. The figures presented in this section do not necessarily reflect the entire country’s poll worker population nor lend themselves well to comparisons with past election cycles.

3 See the history of the EAC’s Help America Vote College Program, as well as its more recent Election Workers: Successful Practices manual from 2016.

4 The term “vote center” has emerged in recent years to describe centralized polling sites that consolidate multiple traditional precinct-based polling stations and allow voters to cast ballots at any vote center in the jurisdiction. See, for example, Indiana’s description of its vote centers.

7  Wisconsin alone accounted for 63 percent of these jurisdictions with a single polling place, as the state reports EAVS data at a municipal level (whereas most other states do so at the county level).