Voting in the Unites States in the 21st century has undergone some significant changes since the Norman Rockwell image of the voter in the polling booth. One of the most  significant changes is the trend of more and more people receiving and casting ballots before Election Day.

Each state has its own laws and regulations governing when, where, and how voters can cast ballots. All states allow for some form of absentee voting by mail, however this process is administered in different ways by  the states, including:

Excuse required absentee voting: A voter must provide a reason why they are casting an absentee ballot and cannot appear to vote on Election Day.

No-excuse required absentee voting: A voter does not need to provide a reason why they are casting an absentee ballot and cannot appear to vote on Election Day.

Vote by mail: All registered voters in the jurisdiction are mailed a ballot.

Additionally, certain states allow for early voting, which allows qualified voters to cast a ballot in person at designated locations and during specific times prior to Election Day. In the Election Administration and Voting Survey (EAVS), early voting data includes both early votes cast on voting machines and absentee ballots that are cast at an in person location prior to Election Day. 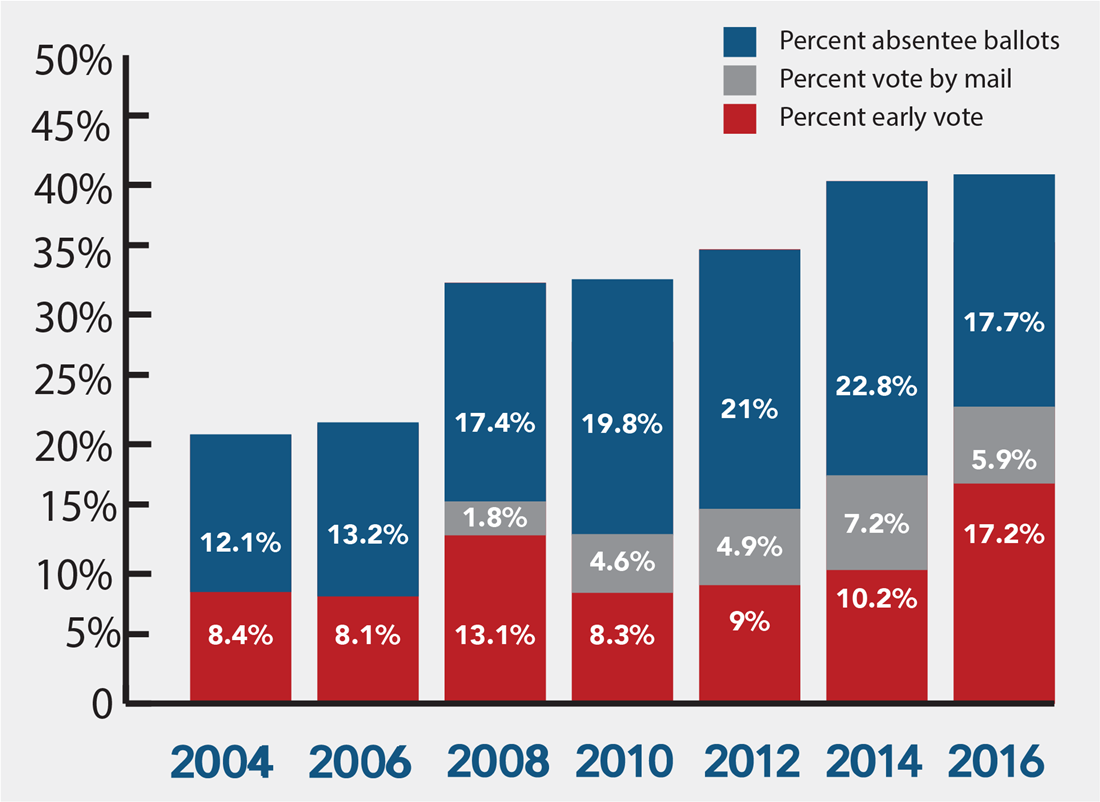 Trends in the States

In 2016, 16 states showed a combined percentage of greater than 50 percent of votes cast early, by mail, or via absentee voting.

Another trend to watch is the way voters return ballots they receive in the mail. In the states where election officials mail ballots to all registered voters, recent data shows the majority of those voters do not return their ballots in the mail. They either drop them off at designated locations or at drop boxes.

Amber McReynolds, director of elections for the City and County of  Denver,  has said: “Essentially, it’s ballot delivery. And I very specifically say that. I don’t call it ‘vote by mail.’ And the main reason why is that most voters actually return their ballot in  person, as opposed to using the Post Office to mail it back.”3 In her county in 2016 for example, 80 percent of those who cast a mail ballot dropped those ballots off rather than used the mail.4

Denver is not alone. The 2016 SPAE asked mail voters how they returned their ballots. In Colorado, 73 percent of those surveyed said they dropped them off in person, 59 percent reported they did so in Oregon, and 65 percent in Washington.5

EAVS data show that the percentage of voters who cast their ballots on a voting machine at a polling place on Election Day has declined steadily over the past decade, while the number of states offering early voting, no-excuse absentee voting, and vote by mail has increased. As more states consider options such as vote by mail, the EAVS will capture if and how this trend continues.

2 “Defining the Barriers to Political Participation for Individuals with Disabilities,” Thad E. Hall and R. Michael Alvarez, May 14, 2012, p. 4.

5 “2016  Survey of  the Performance of American Elections, Final Report,” Appendix 4.