Voter registration is the backbone of American elections. How citizens get on voter rolls and how these rolls are maintained by election officials is an ongoing and critical part of the voting process. This EAVS deep dive examines voter registration data from the 2016 election cycle across the nation.

Of the 65 million accepted voter registration applications nationwide, nearly half were current registrants updating their information.

Getting on the Rolls and Updating Information 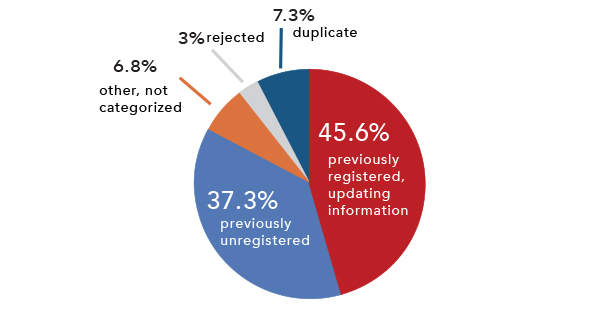 Of the 65 million accepted applications, nearly half - 35 million, or approximately 46 percent - were current registrants updating their information, such as a change of address, a name change, or a change in party affiliation. There were almost 29 million new registration applications (37 percent of all applications) that were processed and added to voter rolls. This data highlights a sometimes overlooked part of the registration process – that the plurality of registration transactions is often people updating their information, not new registrants.

Where, When, and How People Register

People register to vote or update their information in a number of ways and at a wide variety of locations. Until fairly recently, voter registration was a process done entirely by paper and then returned by mail, in person, or through a third-party registration group. While paper is still the principal way citizens register to vote, over the past 15 years, more and more states have begun offering the option to register online.

While paper is still the primary way citizens register to vote, online voter registration accounts for an increasing number of applications and is more broadly available to voters with each passing year.

Online voter registration allows those eligible to complete and submit a registration application or update to their information entirely online, with no paper involved for the voter and no returning the form by mail or in person.

Number of states with OVR 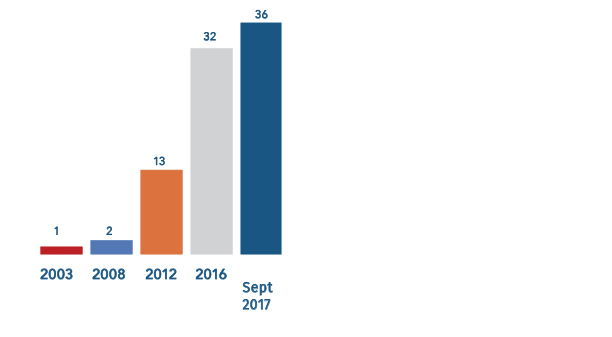 During the 2012 and 2016 election cycles, nearly a third of all voter registration applications came from Department of Motor Vehicle (DMV) agencies, while applications received at election offices experienced a decline.

As it has been since the passage of the National Voter Registration Act (NVRA, sometimes called “Motor Voter”) of 1993, the most common source of registration applications during the 2016 election cycle was from Department of Motor Vehicle agencies. The NVRA requires registration opportunities be provided at motor vehicle agencies along with a number of other state agencies.

There are other ways – and times – when citizens get on the voter rolls, and some were used for the first time in 2016.

In January 2016, Oregon became the first state to roll out automatic voter registration. During qualifying interactions at the department of motor vehicles, eligible Oregonians are opted into voter registration and then receive a mailing from the state elections division explaining their options for registering to vote. These options include registering as a nonaffiliated voter; choosing a political party; or opting out and declining to register.

Data from Oregon, the first state to enact automatic voter registration, provides an interesting first look at how the policy may impact voter rolls in the other states which have passed, but not yet enacted, similar legislation.

According to Oregon state data2 from January 2016 through July 31, 2017, approximately 420,000 mailers were sent through this process, and nearly 375,000 of those people were registered to vote. Eight other states and the District of Columbia have passed similar laws or approved the policy through administrative action, although it has yet to be implemented in most of these states.

Another option that has been offered in some states for more than forty years is same-day voter registration. In 2016, 21 states and the District of Columbia reported 1.3 million voters used some form of same-day registration, registering and casting a ballot at the same time either on Election Day or sometime during early voting.3 These numbers will likely grow as California implements same-day registration.

The NVRA also has requirements to ensure voter lists are accurate and current. A key component of this process is the use of confirmation notices, when an election office has evidence that a registrant has moved outside the office’s jurisdiction and officials start a process of address confirmation.

Forty-seven (out of 55) states and territories provided related data in the EAVS and reported sending approximately 19 million confirmation notices to registrants during the 2016 election cycle. Of the 47 states and territories, 37 provided data on the results of these notices and nearly nine million were categorized as “status unknown.” Approximately 2.5 million were returned as undeliverable; a little more than 2.4 million valid confirmations were received back from registrants; and more than 800,000 were received back and deemed invalid by election officials.

The NVRA also requires states to have evidence that a citizen is no longer living in the jurisdiction where they were registered before removing him or her from the registration rolls. From 2014 to 2016, approximately 16.7 million registrants (8.8 percent of all registrants) were removed from state voter registration rolls.

The most common reason for a registrant’s removal from the rolls, about 5.2 million removals or 31 percent of all reported removals, was because they moved out of the jurisdiction. The second most common reason was failure to respond to a confirmation notice and not voting in the following two federal elections – about 4.4 million or 26.1 percent of all removals. Another quarter or removals, approximately 4.1million, were removed due to death.

Reasons for removal from voter rolls 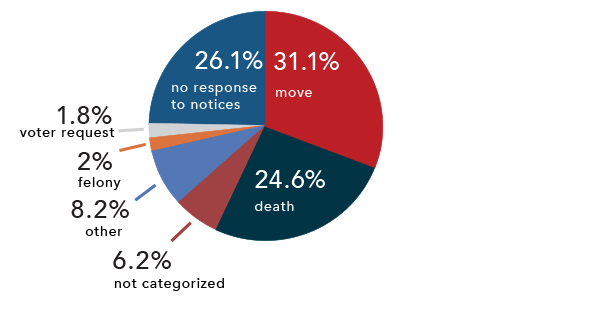 In the 2018 election cycle, more voters than ever will have opportunities to register and update their registration information online – possibly in nearly 40 states.

Additionally, more states may join the Electronic Registration Information Center (ERIC), a non-profit corporation governed by a board of directors drawn from its 21 member states (including the District of Columbia). ERIC, via a data center created using IBM technology, produces reports which can be used by states in identifying inaccurate or out-of-date voter registration records, as well as to reach out to eligible but unregistered residents.

Technology and innovation will continue to have an impact on voter registration, and many other aspects of elections, in the coming years - and the 2018 EAVS will capture this data and much more.

1 The remaining approximately 5 million applications were described as “other” or not categorized by states.

3 Alaska and Rhode Island allow same day registration (SDR) for the office of president and vice president only. Hawaii allowed SDR during early voting in 2016, and will allow it for early voting and Election Day voting beginning in 2018. Arizona and Texas do not have SDR, however some jurisdictions reported allowing it. Vermont reported, “all of Vermont allowed SDR thorough affirmation form when DMV application form was not received.”