Crunching the Numbers to Help Voters with Disabilities and Election Officials 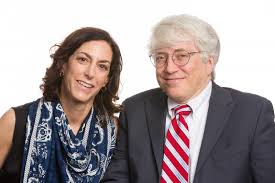 As the EAC wraps up our July series on the recognition of innovations in election accessibility, we caught up with Professors Lisa Schur and Douglas Kruse of Rutgers University. They recently issued a report entitled, “Disability and Voter Turnout in the 2016 Elections.” As in their past reports, the findings are invaluable additions of ways to improve the voting process for people with disabilities.

It is research efforts like this that will help us increase participation and registration for voters with access needs across the United States. Below are Doug and Lisa’s answers to our questions:

EAC: Lisa and Doug, please tell us about your recent study, “Disability and Voter Turnout in the 2016 Elections.” Why did you undertake this effort?

Response: Voting is a fundamental act in a democracy. If people with disabilities are not able to vote, or can only do so with difficulty, their interests and needs are likely to be overlooked by public officials. Furthermore, this sends the message of exclusion—that people with disabilities are not welcome and are not expected to participate in the political sphere.

Many studies over the past 20 years have found persistent voting gaps between eligible citizens with and without disabilities in the U.S. At the same time, there have been efforts to increase voting access on both the federal and state levels, such as the Help America Vote Act and the information distributed by the EAC and the Election Center. It is important to continue to study turnout and voting experiences of people with disabilities to assess areas where progress has been made and to develop and encourage best practices.

EAC: Lisa, Our nation recently celebrated the 27th anniversary of the Americans with Disabilities Act (ADA). The Act strives to foster independent living and community involvement for people with disabilities. What tips can you offer election officials in learning more about this landmark law?

Response: The 1990 ADA represents a powerful commitment to increase the social and economic inclusion of people with disabilities, a commitment that was strongly reinforced in the 2008 ADA Amendments Act. The physical environment has undoubtedly become more accessible because of the ADA, and there has been important progress in other areas such as Internet access. To increase inclusion, Title II of the ADA establishes that people with disabilities have a full and equal opportunity to vote. The ADA and other laws protecting the rights of voters with disabilities are reviewed at the Department of Justice website with descriptions of what election officials need to do. As part of this, the Department of Justice provides an ADA Checklist for Polling Places.

Response: One of the most interesting findings in this research is that employment appears to eliminate the disability voting gap:  there is no difference in turnout between employed people with and without disabilities, but a substantial disability gap among the non-employed.  Only one-third of working-age people with disabilities are employed, compared to two-thirds of people without disabilities.  Many of the non-employed are socially isolated so are unlikely to be asked or expected by others to vote.  Employment provides both more social contact and resources (especially income) that are linked to higher turnout.  This is yet another argument for increasing employment opportunities for people with disabilities.

EAC: Lisa and Doug, in 2012, you led a national survey focused on voters with disabilities. What were some of the key findings? Are you planning on conducting the survey in the 2018 elections?

We have applied for funding to re-do this survey following the 2018 elections, working with election officials with an eye toward tracking progress since 2012 and hopefully identifying the effects of different policies and efforts.

EAC: Lisa and Doug, both of you are leaders in the study of people with disabilities in the voting process. What tips or best practices would you recommend to election officials in assisting voters with disabilities?

Response: Lisa compiled some of the best practices in this area for the 2013 Presidential Commission on Election Administration. There are five categories of best practices that a number of states and localities have used:

EAC: Lisa and Doug, your recent study indicates that voting participation of people with disabilities is not advancing as quickly as we had hoped. What suggestions can you provide election officials and advocacy organizations to improve in this area?

Response: We outlined the major best practices above. The fact that the election system is so fragmented in the U.S. can make it harder to disseminate practices, but also provides a lot of room for experimentation to improve voting access and share the results.

While many states and localities face budget constraints that may restrict their ability to improve polling place accessibility, the good news is that many improvements do not cost a lot of money. Some are as simple as providing chairs for people who find it difficult to stand in line to vote, making sure nothing obstructs the path for blind voters or wheelchair users, and providing portable ramps if there is a step or two to get into the polling place. Changing to a permanent “no-excuse” mail ballot system may even save money.  Some of the best ideas should come from partnering with disability organizations which will provide advice for free in order to help their members.

We would like to extend a big thank you to Lisa and Doug for their great contributions in the study of elections and voters with disabilities. The EAC will continue to draw upon their work as we strive to meet the promise of an independent and private vote for all voters with access needs. For a complete view of our July accessibility outreach efforts, please visit EAC’s recent statement celebrating the anniversary of the ADA.