The U.S. Election Assistance Commission (EAC) conducted a “Women in Elections” campaign to coincide with Women’s History Month. During the month of March, we interviewed several women at the heart of elections at the Secretary of State and county level, and within academia, and shared their insight about elections on the EAC’s Facebook, Twitter and Instagram accounts.

We are completing our 2019 series by turning the tables and asking a few questions of the series’ interviewer, EAC Chairwoman Christy McCormick, a prominent “Woman in Elections” in her own right.

Natalie, EAC: Thank you for joining me for this series, Christy. I wanted to start by asking you how your career in elections began.

McCormick: When I was a child, my parents often worked on political campaigns and they pulled me and my siblings into addressing envelopes, delivering campaign literature, and serving food at fundraising events, so I have had just about lifelong involvement in elections. In 1988, I began my voting career by registering voters for the Town Clerk’s Office in the town of East Haven, Connecticut, and when I moved to Virginia a few years later, I was sworn in as an assistant voter registrar for York County, Virginia. My career in voting continued when I joined the Department of Justice’s Voting Section in the Civil Rights Division, where I enforced federal voting statutes for almost a decade, including being deployed to Iraq for a year as the DOJ elections expert for their 2010 elections, before being appointed to the EAC.

Natalie, EAC: Following your confirmation in December 2014 by the U.S. Senate, you served as the EAC’s first Chairperson in four years and re-establishing the Commission’s operations. What were the unique challenges of that?

McCormick: Unfortunately, the Commission had been without any Commissioners for years, and there had been several bills introduced in Congress to terminate the EAC. The staff continued to work to keep the agency running and to provide value to the election community as best as they could, but with repeated attempts to shutter the Commission, they were understandably demoralized and anxious about the future of the EAC and their jobs.

When Commissioners Hicks, Masterson and I were sworn in, we found a disquieted environment and knew we would have to work hard to improve the atmosphere in the office and change attitudes about the EAC. We purposely set out to meet with EAC detractors to listen to their concerns. We made it our focus to get out from behind our federal desks to visit the states and localities, hear about the needs of election administrators, explain that our mission was our agency’s middle name, “assistance,” and that we had no designs on taking over elections or working outside the EAC’s responsibilities as set out in the Help America Vote Act.

As the leader of that effort, I am pleased that we were successful in changing many hearts and minds about the benefits of the EAC and restoring it to its appropriate place in serving the election community.

We still have much work to do. Among other things, we will continue listening to our stakeholders and strive to address their needs, and we still need to restore agency funding so we can provide essential resources to support professionalization of election administration across the country.

Natalie, EAC: During your time as an EAC Commissioner, you also instituted the Commission’s first Language Accessibility Summit and Election Data Summit, and established a working relationship with the United States Postal Service (USPS) to address postal issues in elections. Describe why these events and partnerships are so important to the election community.

McCormick: The responsibilities of election administrators are immense and varied; it is a much more complex job than most people realize. There is a perception that all that needs to be done to run an election is to pull some voting machines out of a storage closet once or twice a year, take a vote tally and push the machines back into the closet until the next election. Nothing could be farther from the truth.

Elections are a 24/7 job that entail numerous responsibilities and details, with strict conformity to procedures and conclusive outcomes that can be nothing less than perfect. An election administrator’s duties include compliance with complex laws, such as the minority language provisions of the Voting Rights Act (even unintentional violations of which may get elections officials in legal jeopardy), timely mailing and receiving of election materials and ballots (the failure of which can result in disenfranchising voters), and tracking of dozens of data points (the reporting of incorrect data may bring questions of ability and perhaps even corruption), and much more.

With a few exceptions, elections are underfunded at every level of government, and election administrators often have to look outside of their jurisdictions to maximize and leverage the limited resources they have in order to continue to improve their services.

While the federal government does not run elections, many of its agencies, in addition to the EAC, can provide support and information to those who do. Partnerships between and among the appropriate agencies and election jurisdictions are necessary so that our local and state election officials are able to provide the public with the best run elections possible.

Natalie, EAC: You are serving as Chair of the EAC for a second time, the first woman ever to do so. What are some of your priorities before the 2020 Presidential Election?

McCormick: Expectations of and attention to the 2020 election cycle is going to be extremely high, and the actions of election administrators will be scrutinized more than ever. It is the mission of the EAC to help election officials prepare throughout 2019, so they are ready for the 2020 elections. The EAC has several priorities for this preparation year, all of which are extremely important and essential to safe, accessible and fair elections.

With the knowledge that foreign states and bad actors are going to increase their efforts at interfering and disrupting our elections, we will continue to focus on the importance of cybersecurity and robust protocols for all voting systems, as well as physical security of polling places and election offices. Even one incident could have a deleterious effect on public trust and participation in our elections. We will be working closely with the Department of Homeland Security, the National Counterintelligence and Security Center in the Office of the Director of National Intelligence, the Department of Justice, the Center for Internet Security, and other agencies and organizations to provide information and resources to state and local election officials to ensure the security and integrity of our elections.

During the past several years, unprecedented natural disasters and physical security threats have occurred during or near Election Day. Last year, hurricanes and fires affected several election jurisdictions – even 9/11 was an election day in New York. Such emergencies have the potential to disrupt even the most well-planned elections, which means that election officials must be prepared in advance for the truly unexpected. The EAC is launching a Disaster Preparedness and Recovery Working Group made up of election officials who have had to deal with election stabilization and recovery in the midst and aftermath of such events. This working group will assist the EAC to provide training, resources and best practices in this kind of contingency planning, and will also seek to establish direct lines of communication between election administrators and national relief organization leaders to ease the burden on election officials and the voters they serve when a disaster causes massive damage to a jurisdiction’s election system.

This year, the EAC will also be persevering to meet one of the greatest mandates of the Help America Vote Act, which is to assure that all voters are able to vote privately, independently, and on an equal basis. Over the past few years, the EAC Commissioners have heard testimony on the difficulties, and in fact disenfranchisement, of voters with disabilities and this must improve. All voters, regardless of physical ability, must be afforded the opportunity to participate in our representative democracy. The EAC will partner with disability groups, networks, and organizations to understand the challenges faced by millions, and growing numbers of, voters with disabilities in casting their ballots, and will seek and promote permanent solutions to those issues.

Finally, the EAC will continue to advance the update to the Voluntary Voting Systems Guidelines, known as VVSG 2.0. Currently the VVSG 2.0 Principles and Guidelines document is out for public comment and we look forward to reading the comments that are submitted. The EAC staff is still working with the National Institute of Standards and Technology on the specific requirements under each of those higher-level principles and once those requirements are received in final draft form from our Technical Guidelines Development Committee, we will be presenting them to the EAC Standards Board and Board of Advisors for comment and approval, before providing an additional public comment period and consideration by the Commission. There are a number of policy decisions that need to be discussed and decided, but hopefully we will have a new set of guidelines and requirements, with test assertions, soon. It’s a complicated process with high stakes, but we will do our best to provide a set of guidelines that will promote innovation, better security, accessibility, and usability in our nation’s voting systems.

Along with election officials, we are always striving to improve the voter experience, which is at the heart of everything we do at the EAC. Technology and best practices have tremendously changed over the past twenty years, and voters expect the elections community to be up-to-date in the way we vote, maintaining the privacy of personal information, and ensuring the security and integrity of our system. We will continue to strive to improve elections alongside state and local election officials, because these efforts ensure that eligible Americans have access to the ballot box and a voice in our republic. 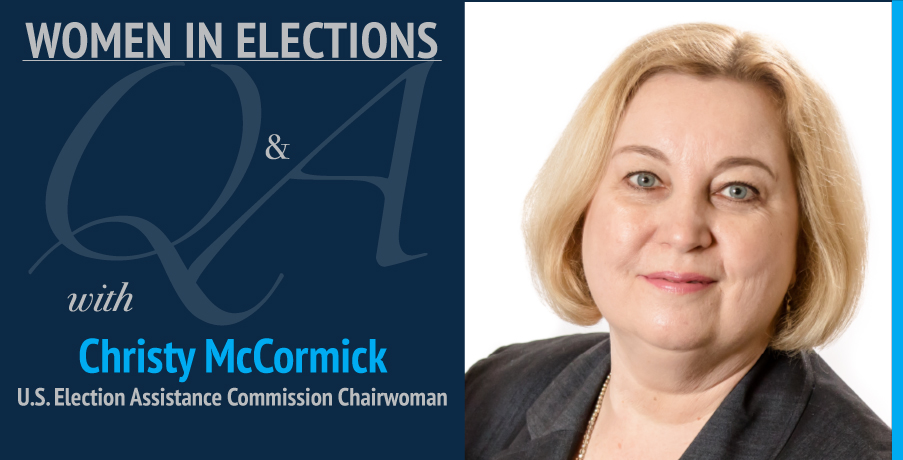