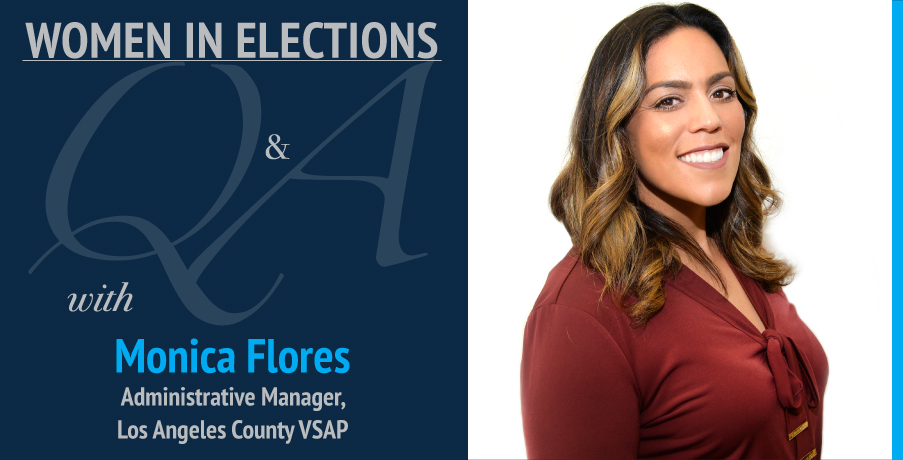 The EAC has launched a “Women in Elections” campaign to coincide with Women’s History Month. During the month of March, we will interview several women at the heart of elections at the federal, Secretary of State, state election director and county level and share the significant insight they have to share about elections on the EAC’s Facebook, Twitter and Instagram. Follow the conversation online at #WomeninElections.

Today, we are continuing the series with a conversation between EAC Vice Chair Christy McCormick and Monica Flores, Administrative Manager for the Los Angeles County Voting Solutions for All People initiative (VSAP).

Christy, EAC: Thank you for joining me for this series, Monica. I wanted to start by asking you how your career in elections began.

Monica, VSAP: I was 10 years into a successful banking career when I decided to go to graduate school to pursue public administration. I enjoyed banking, but I knew that my life-long passion was in serving the public and empowering individuals who frequently have their voice silenced.

While at graduate school, I attended a career fair to start looking for a part-time job to help pay the bills until I finished school. I came across the Los Angeles County Registrar-Recorder/County Clerk’s booth that happened to be recruiting poll workers. In addition to submitting a poll worker application, they invited me to leave my resume in case they had positions open up in the future. I received a call three months later asking if I was interested in a part-time position with the Registrar-Recorder/County Clerk. I accepted the position, assuming it would be a great part-time job while I was at school. This year will be 10 years since graduating and I’m still here!

Christy, EAC: You have not only served in Los Angeles County during a unique time of innovation, but have been a leader in creating that innovation. Los Angeles County is replacing the voting system it relied upon for decades and is engaged in an unprecedented effort to overhaul the entire experience of voting. Before we dive into the details the new system, please explain why the approach of the Voting Solutions for All People initiative is so novel.

Monica, VSAP: The VSAP approaches voting system development and implementation in a way that it has never been done before. Traditionally, when a county needs a new voting system, they go out and select from a limited amount of options available from vendors. There is not much competition in the market, so vendors have not developed systems with voters in mind. They focused on meeting the minimum regulations and understandably, as for-profit businesses, their profit margins.

VSAP takes a completely different approach. The project is focused on developing a voting system that is human-centered and prioritizes the needs of our voters. We have engaged over 3,800 voters, poll workers and other stakeholders through the research and design process to ensure the new voting system meets the needs of our large and diverse electorate. The end goal is to implement a voting system that was not only designed by the county and its voters, but also fully owned by the county and its voters.

Christy, EAC: What are some of the technological innovations that came about as a result of the VSAP research?

Monica, VSAP: Through our public opinion research, including surveys, focus groups, interviews and user-testing, we developed a whole new voter experience that incorporates modern technologies that voters are used to interacting with in other aspects of their lives.

We designed a Ballot Marking Device, which allows voters to use either a touchscreen or headphones with a key pad to mark and cast a paper ballot. We also designed an Interactive Sample Ballot which allows voters to make and save their ballot selections on their mobile device or home computer. After making their selections, the Interactive Sample Ballot generates a Poll Pass, which encodes voter selections in a QR code. The voter may then take that Poll Pass, on their mobile device or a paper print out, and scan it onto a Ballot Marking Device which will load their selections, allow voter to verify and change any selections, and print an official paper ballot — a process very similar to checking in online for a flight and generating a boarding pass. These technological innovations align the voting process with the life of modern day voters.

Christy, EAC: Los Angeles County has launched a number of initiatives designed not only to teach the public about new voting technology, but also to invite them to be more informed about the election process as a whole. Could you describe some of those voter education efforts and what the impact has been?

Monica, VSAP: Our office has taken a very comprehensive approach to educate and engage our voters. We have a team who attends community fairs, conferences, and other events to connect with voters face-to-face. We have also launched major multi-media campaigns and partnered with large media partners to voice our message. Finally, we are very active in social media, dispersing information and addressing questions and concerns on a regular basis. To support our messaging, we have developed a comprehensive marketing effort that includes handouts, brochures, even animated videos and documentaries. Through these efforts, we have engaged hundreds of thousands of voters and provided an effective way of receiving feedback from them.

Christy, EAC: I understand that Los Angeles County’s updated system is expected to be completely rolled out by the 2020 Presidential Primary, but there are some elements that will be implemented as part of a pilot during the 2018 midterm elections. Could you describe some of the new equipment voters may interact with during the midterm elections?

Monica, VSAP: During in the midterm elections this November, we will be implementing our new Vote by Mail ballot, which is designed to be easier for voters to understand and use. We will also expand our early voting opportunities and number of Vote by Mail Ballot Drop boxes —both of these are important components of the new voter experience. Voters who vote in person will not yet see new technologies this November, but will begin to see voting become more convenient and accessible with the expansion of these services.

Christy, EAC: The Voting Solutions for All People has attracted a lot of attention. The program was one of four finalists for the 2017 Ash Innovations in Public Engagement in Government Award and also honored with the Outstanding Innovation in Election Technology Award from the Election Verification Network. What response has the project received from other election jurisdictions, organizations and experts?

Monica, VSAP: The VSAP has received a great amount of support from other jurisdictions and organizations. We are in constant communication with counties throughout the nation who want to learn more about the project and about how they can collaborate and may benefit from it. We have hosted visitors from international election administration offices, such as Mexico and Canada, who have heard about our project and want to learn more about our development process and future voter experience.

We have also received great support from local community organizations, advocacy groups, and election administration and voting technology experts. Some of these community leaders and experts have volunteered their time to serve on our VSAP Advisory Committee and VSAP Technical Advisory Committee. These two groups have guided the project since its research and design phase and continue to provide great input as we move into implementation. These individuals have all been our biggest cheerleaders along the way, and I am extremely grateful to them!

We at the EAC would like to thank Monica for her insight. Keep checking our blog for conversations with “Women in Elections” throughout Women’s History Month and help us celebrate these leaders in the election community.