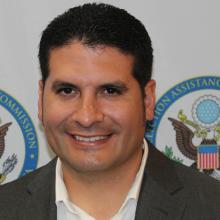 Jerome Lovato received his Bachelor of Science in Electrical Engineering from the University of Colorado at Denver. After working as an electrical engineer in the consumer electronics industry for six years, he worked as a Voting Systems Specialist at the Colorado Secretary of State’s office for 10 years where he served as the voting system certification lead and risk-limiting audit project manager. He is a former Certified Colorado Election Official and former City of Centennial Election Commissioner. Currently, he is an Election Technology Specialist for the U.S. Election Assistance Commission. He serves as an election technology liaison, auditor, and project manager for voting system certification. He also assists jurisdictions with developing processes and procedures for conducting risk-limiting audits.

In 2007, Lovato led the re-certification testing campaigns on three of the four voting systems that were used in Colorado. In 2015, he was heavily involved in piloting four new voting systems for the 2015 Coordinated Election, and assisted in deploying and implementing a new voting system in 56 of 64 counties for the 2016 General Election. He also drafted and revised voting-systems related rules and procedures, conducted county audits and investigations, and provided county support on all voting-systems related matters.

From 2009 until his resignation at the Colorado Secretary of State's office in 2017, he served as the risk-limiting audit project manager. He spearheaded the effort to apply for a grant from the U.S. Election Assistance Commission to conduct research on performing RLAs in Colorado. He assisted counties in conducting RLA pilots, chaired the RLA public working group, created training material on how to conduct RLAs and conducted RLA trainings at regional county meetings, drafted software specifications for RLA software, and created a project plan to implement a statewide RLA for the 2017 Coordinated Election.