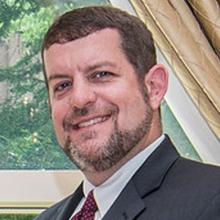 Matthew Masterson was an EAC Commissioner from December 16, 2014 until March 23, 2018. He was nominated by President Barack H. Obama and confirmed by unanimous consent of the United States Senate on December 16, 2014 to serve on the U.S. Election Assistance Commission (EAC).

Prior to his appointment with EAC, Commissioner Masterson served as Interim Chief of Staff for the Ohio Secretary of State, a position he held since November 2014, he previously served as Deputy Chief of Staff and Chief Information Officer from 2013 to 2014, as well as Deputy Director of Elections from 2011 to 2013. In these roles Mr. Masterson was responsible for voting system certification efforts by the Secretary of State’s office including being the liaison to the Ohio Board of Voting Machine Examiners. Additionally, Mr. Masterson was in charge of Ohio’s effort to develop an online voter registration database and online ballot delivery for military and overseas voters. He is widely regarded as an expert on elections administration throughout Ohio and the country.