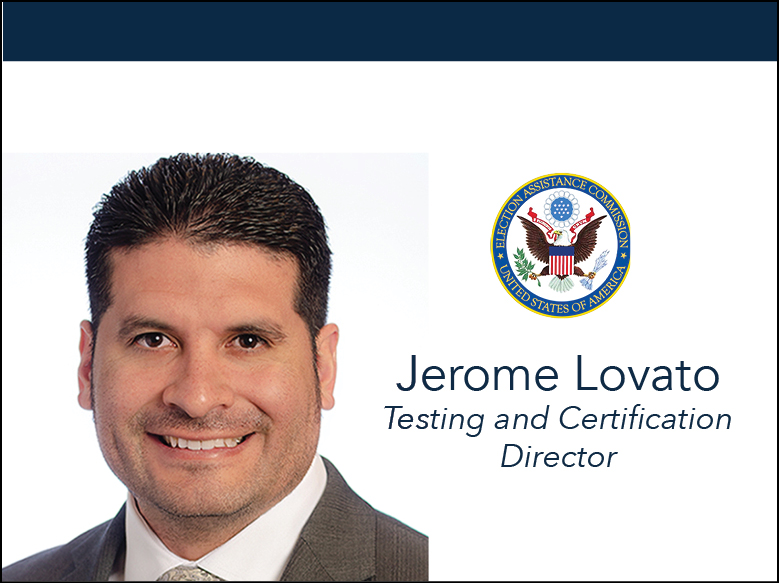 Yesterday, the EAC appointed Jerome Lovato as its new Testing & Certification Director. Jerome came to the EAC in September 2017 after more than 10 years of working at the Colorado Secretary of State’s Office (SOS), where his positions included Voting Systems Certification Lead and Risk-Limiting Audit Project Manager.

As a member of the EAC, Jerome has tested and certified numerous voting systems and has been integral to the development of the newest generation of the voluntary voting system guidelines (VVSG).

Jerome is also considered one of the leading post-election audit experts in the country. Last year alone, he provided risk-limiting audit assistance and training across five states and compiled feedback from jurisdictions that had either implemented or piloted RLAs into the white paper “Risk-Limiting Audits – Practical Application.”

I wanted to interview Jerome so readers could get to know more about his past work at the EAC, his new role and upcoming developments for the Testing & Certification Program.

Brian: You’re passionate about voting technology. What excites and interests you the most about voting systems?

Jerome: I am excited about the future of election technology in general. In regards to voting technology, the DARPA voting system (by Galois) and the recently announced ElectionGuard project (by Microsoft) are intriguing ventures that I look forward to learning more about.

The DARPA voting system will be designed using secure hardware and open source software. ElectionGuard is a free open-source software development kit (SDK) that will enable end-to-end verification of elections, allow third-party organizations to validate results, and allow individual voters to confirm their votes were correctly counted. Both of these projects could have a meaningful impact on voting technology, and they are new developments I will be following closely.

You’re considered one of the foremost experts on risk-limiting audits, and post-election audits in general. Why are audits so important?

My first year at the Colorado SOS was spent in the voting system testing bubble – that was my main duty at the time. Shortly after the 2008 Presidential Election, I was involved in investigating a complaint from a candidate who thought that she should have won her contest. That was my first exposure to the importance of election integrity.

You made the move from a state role to the EAC a couple of years ago. What’s that transition been like?

It was a relatively smooth transition. The work was very similar to what I had done at the state, and Brian Hancock and Ryan Macias helped me get familiar with the EAC’s testing and certification processes and procedures.

A couple of things stand out to me:

1) It was a very eye-opening experience to see how elections are conducted in jurisdictions throughout the U.S. - Talk about a complex system!

2) At the state, our Testing and Certification Program affected 64 counties. Our program at the EAC affects exponentially more jurisdictions.

What interested you most about taking on the Testing and Certification Director position?

It’s hard to narrow it down to just one thing, but if I were to say what I find most interesting is the challenge. The EAC has only ever had one other Testing and Certification Director, who did an outstanding job. I will not use the “big shoes to fill” cliché, since I don’t feel like I need to fill anyone’s shoes. However, Mr. Hancock laid a solid foundation for the Testing and Certification Program and I embrace the challenge to make our program the best it has ever been.

What does this change mean to the process for Voluntary Voting Systems Guidelines 2.0, currently out for public comment?

There will be no change in process. Our final public hearing on the VVSG 2.0 will be scheduled for Monday, May 20. From there, the EAC will review the feedback we received during the public comment period to ascertain if any changes are necessary before the guidelines are submitted for Commissioner consideration.

What are your immediate and long-term goals for the Testing and Certification Program?

My immediate goals are:

I thank Jerome for his time and look forward to his tenure as Testing & Certification Director as the EAC works to help election officials prepare for the 2020 Presidential Elections.