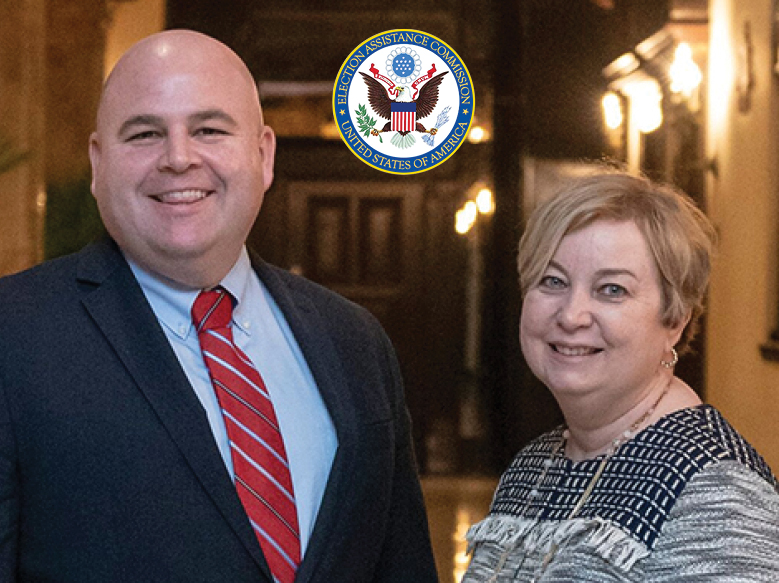 Each visit has affirmed two things: election officials are hard at work preparing for the 2020 Presidential Election and the EAC remains a vital partner in this effort.  As detailed in the EAC’s “Election Administrator Competencies” Wheel, election officials have an expansive range of responsibilities  they must often tackle with few resources and no room for error. The EAC strives to support this work with original resources, opportunities to share best practices among those working on elections, and the administration of federal funds that can ease the financial burdens associated with carrying out secure, efficient, and accurate elections.

2019 kicked off with the restoration of a quorum of EAC Commissioners, giving our agency a much-welcomed boost of expertise and momentum as we prepare for next year’s election and ways we can help America vote. As the nation’s only federal agency focused exclusively on election administration, the EAC is at its best when our work is shaped by feedback from election officials and the voters they serve. We seek this input during our travels, and, in return, we often provide an update about what’s new at the EAC.

We thought it would be beneficial to share some of this information in a blog to give our readers a snapshot of some of our recent activities.

Since the beginning of the year, the EAC has supported election officials as they prepare for the 2020 Presidential Election by:

As part of our next steps, the EAC’s Technical Guidelines Development Committee (TGDC) has scheduled a series of public meetings via WebEx to discuss different requirements associated with the Voluntary Voting System Guidelines:

A two-day in-person TGDC meeting is scheduled for Sept. 19-20, 2019 at the EAC’s Silver Spring headquarters.

While distribution of the new HAVA Funds has concluded, the administration role of our Grants team continues. They continue to share ideas and best practices from state-to-state and provide written feedback on every plan submitted. Our Grants team also provides technical assistance to support effective state administration of funds, including how to make sub-grants, how to track employee time, rules for equipment acquisition, and other elements of effective management of federal funds.

The EAC also continues to update media, Congress and members of the public about the status of state funding.

In March 2019, the EAC formed a Disaster Preparedness & Recovery Working Group  comprised of election officials with hands-on experience successfully administering elections following natural or man-made disasters. The Working Group met for its initial meeting on April 10, 2019 prior to the EAC Standards Board meeting. During their annual meetings, the EAC Standards Board and Board of Advisors also established committees to explore lessons learned and best practices gleaned from disaster preparedness and recovery within the election community.

The EAC will continue to work with each of these entities to open lines of communication between other federal agencies and election officials; create resources that cull the knowledge of election officials who have had to rebuild their systems after severe natural and man-made disasters; and, establish additional avenues of support to expedite recovery when a disaster occurs.

In 2019 alone, the EAC has provided thousands of voting rights cards to voters with disabilities. EAC Commissioners have participated in discussions focused on security and accessibility, such as “Accessibility and Security of Ballot Marking Systems” at the National Federation of the Blind. Commissioners have also participated in forums to gather feedback from voters with disabilities, such as the 2019 Annual Conference on Independent Living, which we will attend this weekend.

With categories in election innovation, voting accessibility and the recruitment, training and retention of election workers, the “Clearie” Awards give the EAC an opportunity to recognize the vital contributions of election officials on a national stage and highlight best practices within the field of election administration.

The EAC will open the submission period for the fourth annual Clearie awards in early fall and we urge all jurisdictions to submit their best ideas and innovations so that we can share them nationwide.

It’s been a busy 2019 so far, and the pace will only pick-up as next year’s Presidential Election approaches. We have a lot of exciting new resources and events planned for the coming months, so we encourage you to reach out to the EAC for election-related information, resources, and support. We also hope you’ll never hesitate to contact us with your ideas and feedback. Please feel free to contact us via /contact/.