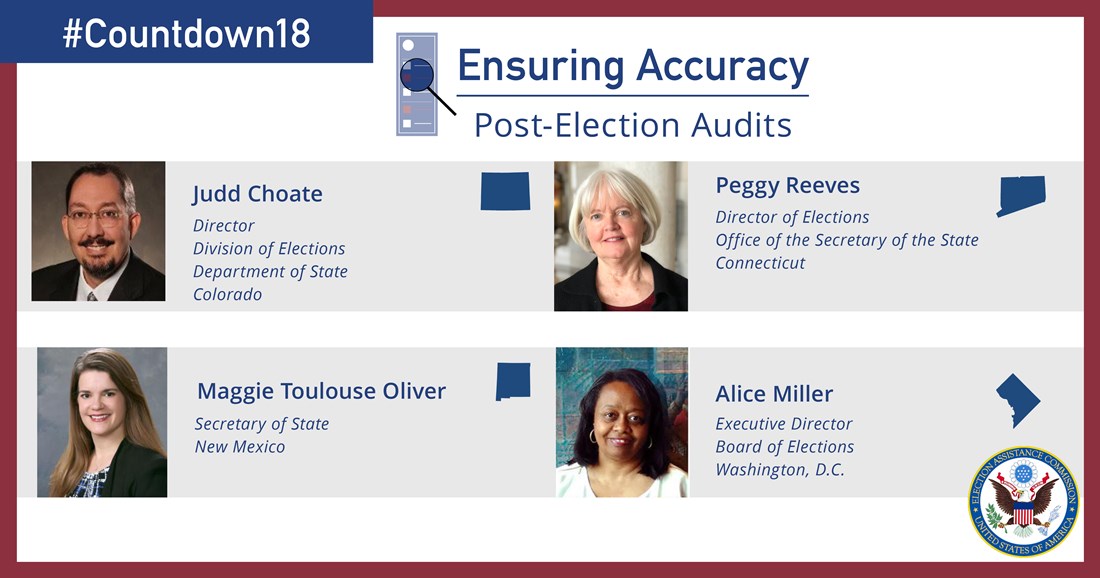 Our right to vote is the foundation of our democracy. As citizens, we must be able to trust that our election process is secure and accurately reflects the will of the voters. One emerging trend that ensures voter confidence are post-election audits.

In 2010, the U.S. Election Assistance Commission (EAC) issued grant awards totaling $1,463,074 to county and state organizations to support research and development for managing and conducting post-election audit activities. California, Colorado and Ohio used the awarded grant money to conduct research on risk-limiting audits (RLA), a type of post-election audit. Since 2008, RLA pilots have been conducted in jurisdictions in California, Colorado, Indiana, Ohio and Virginia.

Risk-limiting audits are post-election audits that go further by providing strong statistical evidence that the winner of a contest is the winner and that the loser is the loser, and have a high probability of correcting the outcome of an election if it is wrong, according to Jennifer Morrell, Democracy Fund Consultant and former Deputy of Elections in Arapahoe County, Colorado where she played an instrumental role in the state’s first risk-limiting audits last year.

“Paper ballots are key to a successful RLA,” says Jerome Lovato, Election Technology Specialist for the U.S. Election Assistance Commission. “With a paperless Direct Recording Electronic (DRE) machine or online voting, there is no original ballot or “artifact” that can be used to determine the original intent of the voter. One-on-one comparisons of the ballot and the ballot’s recorded vote provide the most information and the most certainty.”

In an RLA, election officials hand count a random sample of ballots, then verify if the winner of the random sample matches the winner of the reported results. The number of ballots to audit with an RLA is dependent on three variables: the risk limit, the margin of the audited contest, and which sampling methodology is being used (ballot polling, ballot comparison, batch polling or batch comparison). A ballot comparison RLA is most efficient, as it manually compares a ballot to its recorded vote.

An RLA is designed to be a transparent process, where a third party could recreate the audit, using the same data, same ballots, and getting the same result.

Currently, the EAC is conducting RLA pilots in Michigan with three different types of voting systems, using a method that has never been used before. Lovato says,“If it works well, it could possibly be used in any state that uses a paper ballot.”

“The RLA process is still in its infancy, says Lovato. “It will continue to evolve as the process is tested on the different types of voting systems states use. No matter what the auditing process is, ultimately, the goal is to ensure that all voters have trust in the outcome of an election.”

This week, we will learn about post-election auditing processes in New Mexico, Colorado, Connecticut and Washington, D.C.