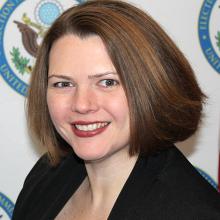 Prior to joining the EAC, Brenda was Vice President of Communications at Human Rights First, where she directed the nonprofit’s robust communications department in work to establish the United States as a global leader in the protection of human rights. Among her campaigns were efforts to end torture, protect refugees, support human rights defenders, fight discrimination and end human trafficking.

Previously, Brenda was Director of Communications at Alliance for Justice, where she led the nonprofit’s communications work, including a successful national and state-level campaign to ensure justice for those harmed by dangerous pharmaceutical drugs. She served as a producer for the organization's 2008 short documentary film on that topic, “Access Denied: The Fight for Corporate Accountability.” Earlier in her career, Brenda was Communications Director for the Washington, DC-based Death Penalty Information Center (DPIC), where she authored a media training handbook and frequently delivered death penalty-related communications training to elected officials, law professors, attorneys, advocates, victims' family members, and death row exonerees from across the nation.

Brenda formerly served as Senator Olympia J. Snowe's (R-Maine) Deputy Press Secretary, worked on a number of political campaigns, and spent time as a newspaper reporter in Pennsylvania. She holds a B.A.in Communications and Political Science from Lycoming College.