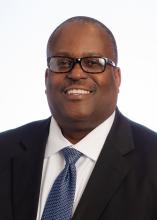 Gregory T. Moore is an EAC Board of Advisors Member.

Gregory T. Moore is as Executive Director of the NAACP National Voter Fund, Mr. Moore is responsible for the overall coordination of national programs designed to promote voter rights, election reform and issues that are critical to the NAACP and its branches, while also increasing voter education and participation among African Americans and communities of color throughout the US.

Mr. Moore has a long history of political empowerment and advocacy, serving in a number of leadership positions throughout his 28 years of issue advocacy. Most recently, Mr. Moore served five years as the Chief of Staff to the Dean of the Congressional Black Caucus, US Representative John Conyers (D-14, MI). He served as Deputy Political Director for the Democratic National Committee, where he was instrumental in developing the Voter Registration and outreach programs while also overseeing Base Vote Constituency programs and activities nationally. While at the DNC, he also served as the Liaison to the Training division and targeted Coordinated Campaigns, strategic planning and implementation of the 1996 Clinton-Gore re-election campaign.

Mr. Moore has also served as the Executive Director of the Citizenship Education Fund, the civic educational arm of the National Rainbow Coalition. Private sector involvement includes the founding of GTM Consulting Services, a political consulting firm, where he served as its President and CEO, and TriCom Associates Advertising Firm, where he served as Senior Vice President for Government Relations. Mr. Moore received his Bachelor of Science Degree from the College of Communications, Ohio University.