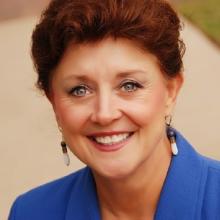 Dana Debeauvoir is an EAC Standards Board Member.

County Clerk Dana DeBeauvoir has always been inspired by public service.  Her interest led her to obtain a Masters Degree from the LBJ School of Public Affairs and ultimately to run for public office.  Since her election as County Clerk in 1986, Dana has devoted herself to bringing high ethical standards, effective and cost efficient management practices, the benefits of new technology, and high quality customer service to the office of the County Clerk.  The Clerk’s Office has a wide range of responsibilities including the conduct of elections; the filing and preservation of real property records; and the management of civil, probate, and misdemeanor court documents.

Dana’s commitment to excellence in government has received nationwide acclaim.  In 2009, Dana was named Public Official of the Year by the National Association of County Recorders, Election Officials and Clerks (NACRC).  The National Association of Election Officials (Election Center) also awarded Dana with the 2009 Minute Man Award for developing an effective security practice that is effective, inexpensive, and easy for election officials to adopt.  In 2005, she was the national recipient of the Election Center’s Best Practices Award for her work in using risk analysis to implement security measures for electronic voting systems.   Travis County is also recognized across the country for its groundbreaking early voting program that is centered on customer-friendly polling locations in high-traffic retail locations.

Dana serves as a Texas Representative on the federal Election Commission Assistance Standards Board and on the Board of Directors and as the Election Committee Chair for the National Association of County Recorders, Elections Officials, and Clerks.

Travis County voters have a passion for democracy, and Dana has been honored to share their enthusiasm with other parts of the world as an advisor and election observer for Bosnia, the Peoples Republic of Bangladesh, Kosovo, and the historic South Africa election that represented the end of apartheid.

Dana has brought innovation to the Clerk’s Recording Division, which is responsible for receiving and maintaining a vast library of documents that includes real property transactions, business names, and marriage licenses.  During her tenure, the once handwritten indexes and vulnerable cloth-bound books that hold some of the County’s most precious and important documents are now preserved as digital or film images.  Access to millions of these documents is now available online and our new eRecording program allows for the electronic filing of many documents.  These programs save customers’ time, reduce costs, and help the environment by decreasing the amount of paper and car trips to the office.  To help prevent identify theft, the Clerk’s Office implemented one of the nation’s most aggressive redaction programs that blocks personal information (such as Social Security Numbers) from appearing on internet documents.

This Office also serves as Clerk of the Courts and manages the documents used in the County’s probate, civil, and misdemeanor court proceedings.  Dana has used technology and enhanced work flow measures to secure the safety of this large volume of records and has implemented new systems such as eFiling and document imaging to convert the cumbersome paper-laden process to one that utilizes electronically filed and retrieved documents.  These new methods not only make it easier for defendants and their attorneys, prosecutors, and judges to quickly view and file information; but save the cost of storing and securing millions of pages of paper documents.

Dana DeBeauvoir successfully ran for re-election in 2014 and will continue her efforts to protect the integrity and accessibility of the election process, to use effective and cost efficient practices and technology to manage real property and court documents, and to do her best to serve each and every citizen of Travis County.